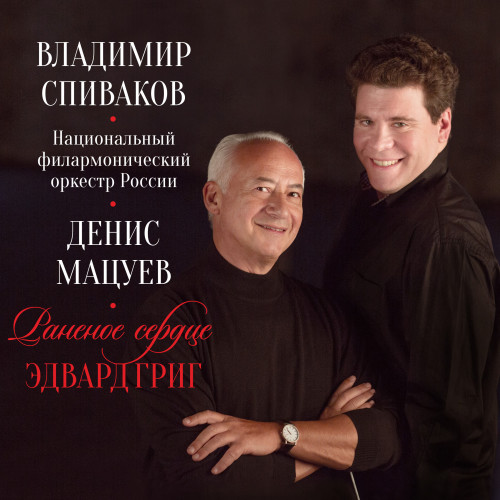 The Moscow International Performing Arts Center December 22, 2015 | Svetlanov Hall VIII Moscow music festival "Vladimir Spivakov Invites..." Denis Matsuev, piano National Philharmonic of Russia Conductor - Vladimir Spivakov Edward Grieg Peer Gynt Suites: № 1, op. 46; №2, op. 55 Two Elegiac Melodies, op. 34 Piano concerto in A minor, op. 16 BOOK TICKET In December 2014 Denis Matsuev, Vladimir Spivakov and the National Philharmonic Orchestra of Russia released a new disc for Sony. The album, titled "A Wounded Heart", included popular classical works of Norwegian composer Edvard Grieg: Concerto for Piano and Orchestra, Suites from the music to Ibsen's "Peer Gynt" and Two Elegiac Melodies for String Orchestra. The alliance of Denis Matsuev, Vladimir Spivakov and his orchestra is a fine sample of creative perfectionism, thoroughly devoid of routine. The album "A Wounded Heart" casts a fresh glance of the contemporary luminaries of the national performing school on the romantic heritage and the role of European musical tradition in Russian culture. The joint work on the Grieg program had a special significance for the musicians, and they decided to bring it to the public in a live performance at the "Vladimir Spivakov Invites ..." Festival. "Grieg's music has followed me all my life, from my early childhood, - says Vladimir Spivakov. - My mother, a pianist, often played his piano pieces and sang his songs that moved my heart deeply. As a teenager, I started to play his Violin Sonatas and was enticed by the amazing sincerity of rendering the most delicate shades of human emotions through music. One of my first orchestral "accompaniments" was Grieg's Piano Concerto played by Denis Matsuev who is widely known and loved for the breadth and power of his human and musician's nature. However, in this Concerto his talent revealed its other facets - transparent lyricism and Bunin's easy breath." Denis Matsuev dedicated his new album to Vladimir Spivakov (on his 70th anniversary in 2014), whom he appreciates highly as a sensitive and delicate partner: "Vladimir Spivakov is a wizard in orchestral accompaniment, in any musical text he finds unique moments which a soloist could grasp not with every conductor, and it makes performing with him most precious. "