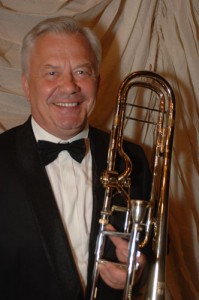 Valery Golikov was born in 1951 in Vologda. In 1971 he entered the Leningrad State Conservatory Conservatoire, where he studied at the trombone classes of Professors A.A.Kozlov and V.F. Venglovsky. After graduating from the Conservatory he worked in the Orchestra of the Bolshoi Theatre, then in the Russian National Orchestra. Valery Golikov is a constant participant of various brass ensembles: for many years the musician performed with the Trombone Quartet and the Brass Quintet of the Bolshoi Theatre, and then with the Trombone Quartets of the RNO and the NPR. As a soloist he performed with the State Brass Band. In 2006, Valery Golikov was awarded the honorary title of Honored Artist of Russia.