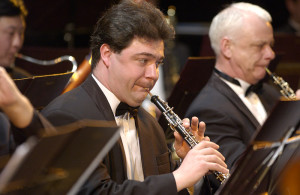 Alexander Arkhangelsky was born in 1975 in Moscow. He graduated from the Russian Academy
of Music (classes of Professor I. Pushechnikov). He worked in the Moscow Philharmonic Orchestra, the Russian Symphony Orchestra of the St. Petersburg Philharmonic Society, the E. F. Svetlanov
State Orchestra and the State Chamber Orchestra of Russia. Alexander Arkhangelsky performs in various chamber ensembles, including the "Baroque" Ensemble with which he has made a number of recordings. The musician has also performed and recorded one of the leading parts in the Double Concerto by J. S. Bach with the State Chamber Orchestra of Russia under Konstantin Orbelian.
Honoured Artist of Russia.