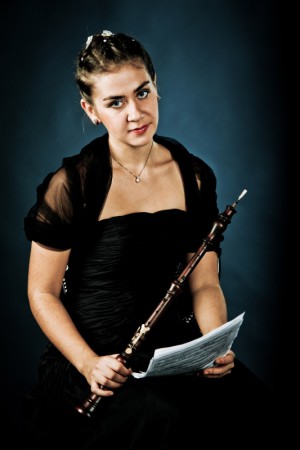 Anastasia Kosarskaya was born in 1987 to a family of musicians. She graduated from the Novosibirsk Specialized Music School-College (Classes of A.M. Taran), the Tchaikovsky Moscow State Conservatoire (Classes of Professor A.Yu. Utkin), and then continued her post-graduate studies there. In 2005-2008 she was a soloist of the MusicAeterna Orchestra (Artistic Director – Theodore Currentzis), in 2008 she joined the “Musica Viva” Moscow Chamber Orchestra (Artistic Director – Alexander Rudin). Since 2010 she has been a member of the National Philharmonic Orchestra of Russia.
She has taken part in such festivals as the "S. Richter December Nights", the "Moscow Autumn", the "Dedication", the EarlyMusic, the Venice Biennale, the MANCA in Nice, the “Sibérie Inconnue” in Lyon, La Folle Journee (“The Crazy Day”) in Nantes. She has performed as a soloist with the State Academic Chamber Orchestra of Russia, the Pratum Integrum Orchestra, the "Hermitage" Ensemble, the "Studio for New Music" Ensemble, the "Russian Conservatory" Orchestra, the Symphony Orchestra of the Novosibirsk Philharmonic Society and others. She was awarded the scholarship of the Ministry of Culture of Russia. She is a Prize Winner of the All-Russia competitions.