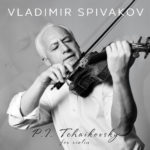 On September 12, his birthday, Vladimir Spivakov has presented a great gift to his numerous admirers: the album of his archive recordings of Tchaikovsky’s music has appeared on all digital storefronts. It includes the Violin Concerto, the "Melodie" from the "Souvenir d’un lieu cher" cycle and the famous Adagio for solo violin from the "Swan Lake" ballet.

Our congratulations to Vladimir Teodorovich on his birthday and best wishes of good health, artistic longevity, new programs and recordings for the joy of all music lovers!

The new album is here. 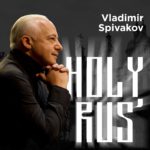 For the Easter Holiday the NPR and Vladimir Spivakov have prepared a gift for music lovers: there has appeared on digital platforms the first of the series of the Russian music albums recorded to the 15th anniversary of the Orchestra at the Moscow Performing Arts Center in the 2015-2016 season - “Holy Rus' ”. The recording was traditionally made with the assistance of the German sound engineer and producer Philipp Nedel and his b-sharp Studio.

The "Holy Rus’ " album includes works by Sergei Rachmaninoff ("We praise Thee" from the Liturgy of St. John Chrysostom, "The Bells" Poem on the text by Edgar Poe in the Russian translation of Konstantin Balmont) and Sergei Taneev (Cantata "St. John of Damascus" on the verses by Alexey K. Tolstoy), sung by Hibla Gerzmava (soprano), Dmitry Korchak (tenor), Vasily Ladyuk (baritone), the Academic Grand Choir "Masters of Choral Singing" and the Choir of the V. Popov Academy of Choral Arts. Conductor – Vladimir Spivakov. 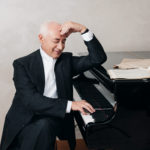 In April, Vladimir Spivakov and the National Philharmonic Orchestra of Russia are completing the many-years labors of recording symphonic works by Sergei Rachmaninoff. The multimedia set, which will contain all his Symphonies and Piano Concertos (also the “Rhapsody on a theme of Paganini”), “Symphonic Dances” and “Three Russian Songs”, will be released to the composer's 150th anniversary in April 2023. The piano part in all Concertos is played by Alexander Romanovsky, while the “Three Russian Songs” recording was made together with the Academic Grand Choir “Masters of Choral Singing” led by Lev Kontorovich.
END_OF_DOCUMENT_TOKEN_TO_BE_REPLACED

The Fifth World Holocaust Forum, held in Jerusalem on January 23, 2020, turned out to be one of the largest events in the history of Israel with the participation of foreign leaders. The Forum, marking the 75th anniversary of the liberation of the Auschwitz death camp by Soviet troops on January 27, 1945, and titled “Remembering the Holocaust: Fighting Antisemitism”, was initiated by the President of the European Jewish Congress Moshe (Vyacheslav) Kantor with the support of the Yad Vashem Holocaust Memorial and Israeli President Reuven Rivlin. Mr. Rivlin acted as the official host. The event was attended by more than 60 delegations from around the world, including 45 royalty, many state and government heads (also President of the Russian Federation Vladimir Putin, who made a speech).

The Forum was joined by the National Philharmonic Orchestra of Russia, which incorporated musicians from France, Germany, Poland, Israel and the USA, as well as by a combined choir of singers from Russia (“Masters of Choral Singing”), France, the UK (Covent Garden Choir ) and the USA (Young People’s Chorus of New York City). Vladimir Spivakov conducted the “international capella”, which became “the symbol of peace and harmony, we are striving for”. Under the baton of the maestro, the works by Isaac Schwartz, Viktor Ullmann, Wolfgang Amadeus Mozart, Karl Jenkins and Camille Saint-Saëns were performed.
END_OF_DOCUMENT_TOKEN_TO_BE_REPLACED 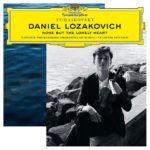 Today, on the 18th of October, the largest record company Deutsche Grammohpon has released the long-awaited album of Daniel Lozakovich, the rising violin star who already won several prestigious competitions in Europe and the USA, and took the First Prize at the Vladimir Spivakov International Violin Competition in Ufa.
The None But The Lonely Heart CD, which features works by Pyotr Ilyich Tchaikovsky (Concerto for violin and orchestra and a number of miniatures, including the Lensky Aria transcription, Valse-Scherzo and Meditation from the Souvenir d'un lieu cher / Memory of a dear place cycle), was recorded this spring with the participation of the National Philharmonic Orchestra of Russia directed by Vladimir Spivakov (the orchestral tracks were recorded at the Svetlanov Hall of the Moscow International Performing Arts Center).
One can see the complete track list and purchase the Album on the Deutsche Grammohpon official website. 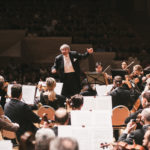 A concert of the National Philharmonic Orchestra of Russia under the baton of  French conductor Michel Plasson was held on the stage of the Svetlanov Hall of the Moscow Intermational Performing Arts Center on April 12. The Maestro had directed previously the Russian collective only in France - at the International Music Festival in Colmar. The first joint performance took place on July 14, 2006 (that year edition of the Festival was dedicated to Emil Gilels), and the program of the concert was compiled exclusively of works by Maurice Ravel - one of Plasson's  most treasured composers. Ravel's music (Ma mère l'Oye, the First Piano Concerto with Philipp Kopachevsky as soloist) was also played in Part 1 of the Moscow concert.

END_OF_DOCUMENT_TOKEN_TO_BE_REPLACED

On February 1, the Moscow Philharmonic Society and the Moscow International Performing Arts Center have started sales of subscription tickets for the 2019/2020 concert season. As usual the National Philharmonic Orchestra of Russia  offers  its own concert series in the main Philharmonic halls and also at its "home" venue – the Svetlanov Hall of the MIPAC. In addition, the NPR again takes part in the Philharmonic assorted subscriptions given in the list below.

The only subscription series of the Orchestra in the Moscow International Performing Arts Center is connected with Beethoven's 250th birth anniversary which will be widely celebrated all over the world in 2020. Soloists from different countries – violinist Daniel Lozakovich (Sweden), pianists John Lill (UK), Alexander Romanovsky (Ukraine – Italy) and Russian Anna Tsybuleva will take part in four programs of the Beethoven-250 cycle. The Violin and all the Piano Concertos of the Viennese classic, as well as two symphonies and the  overture Die Weihe des Hauses (Consecration of the House) will be performed.

The pallet of the Philharmonic series is lavish and varied. In the new season, the NPR will traditionally have two own subscriptions at the Tchaikovsky Concert Hall (Nos. 21-22, the latter includes matinee concerts for family visits with programs aimed at the widest audience), as well as a subscription in the  Rachmaninoff Concert Hall at the “Philharmonic-2” Complex (No. 99).

In a number of popular Philharmonic series, which include concerts with the NPR's participation, there are  subscriptions dedicated to  masterpieces of world music and outstanding performers: “Vocal Evenings” (No. 10), “The Great Piano Concerti” (No. 37, Tchaikovsky Hall), “Great Instrumental Concerti”(No. 43, Tchaikovsky Hall),“Musical Tops ”(No. 73, Tchaikovsky Conservatoire Great Hall), etc.

The subscriptions can be purchased at the box-offices of the Moscow Philharmonic Society, the Moscow International Performing Arts Center and online.
END_OF_DOCUMENT_TOKEN_TO_BE_REPLACED 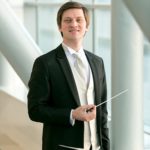 The young conductor Anton Torbeev, who first appeared with the National Philharmonic Orchestra of Russia on September 29 and 30, 2018, (he conducted the “Fairy Tales with Orchestra. Favourites” Concerts with Daniil Spivakovsky), has been accepted by the NPR Management as eligible to join the NPR Conductor-Trainee Group.
END_OF_DOCUMENT_TOKEN_TO_BE_REPLACED 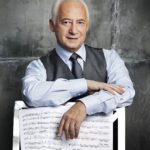