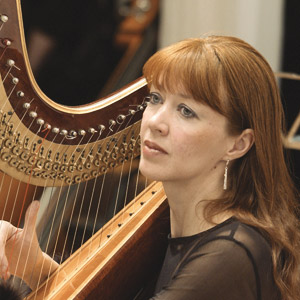 Ilona Nokelaynen is one of the best students of Vera Dulova, the legendary Russian harpist, professor of the Moscow Conservatory. She took numerous awards at such contests as the All-Union Harp Competition in Moscow, the International Harp Competition of the Santa Cecilia Academy in Rome (Italy), the "Tribune of Young Performers" International Competition in Bratislava (Slovakia). She took part in the World Congress of Harpists in Vienna (Austria) and Maastricht (Netherlands). She performs regularly as a member of various chamber ensembles and also as a soloist, playing works for harp and orchestra. She has worked with the best symphony orchestras of Russia. Since 2003 she has been a soloist of the National Philharmonic Orchestra of Russia. The harpist has played on the stages of major concert halls in the world, among which the Musikverein (Vienna), the Concertgebouw (Amsterdam), the Royal Albert Hall (London), the Carnegie Hall (New York), the Gewandhaus (Leipzig), the Salle Pleyel and the Théâtre des Champs-Elysées (Paris), La Scala (Milan). Ilona Nokelaynen made a series of recordings for the "Golden Treasury" of the Soviet Radio, some of them were released on two CDs. She has got the title of "Honored Artist of Russia".