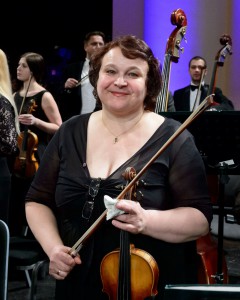 Natalia Geizler was born in Volgograd in 1959. In 1978 she graduated from the Volgograd College of Arts (class of B.V. Sveshnikov), while in 1984 she graduated with honors from the Gorky (now Nizhny Novgorod) State Conservatory (class of L.A. Gantman), and then continued her post-graduate studies there at the class of S.L. Yarashevich. Since her student years she had actively played in various chamber ensembles in Gorky. She was the concertmaster of the Student Symphony Orchestra under the direction of I.B. Guzman, and the Chamber Orchestra of the City House of Scientists. In 1988 she was awarded a diploma for the best performance of classical sonatas at the David Oistrakh First All-Union Violin Competition. In 1994 she got the 3rd prize and the prize for the best performance of a special work at the Chamber Music Competition “Palma d'Oro” in Città di Finale-Ligure (Italy). In 1983-1989 she was a member of the Symphony Orchestra of the Gorky State Philharmonic Society under the baton of Israel Guzman, in 1989-1992 she played in the "Vivaldi-Orchestra" directed by Svetlana Bezrodnaya, in 1992-1993 she was a member of the Moscow Chamber Orchestra under Igor Zhukov, then she played in the Moscow Chamber Orchestra “Musica Viva” under the baton of Alexander Rudin in 1993-2002 and in the Moscow Symphony Orchestra conducted by Vladimir Ziva in 2002-2003. Since 2004 she has been a member of the National Philharmonic Orchestra of Russia.