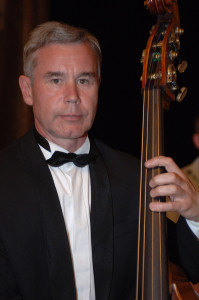 Nikolay Gorbunov was born in 1954 in Moscow. In 1977 he graduated from the Tchaikovsky Moscow State Conservatoire (classes of Professor L. Rakov). He was awarded the Second Prize at the International Competition of Bassists in Markneukirchen (Germany) in 1975. He worked with the orchestra of the Bolshoi Theatre, the State Academic Symphony Orchestra of the USSR under Evgeny Svetlanov, the Russian National Orchestra under Mikhail Pletnev. He played in the ensemble of soloists of the Bolshoi Theatre Orchestra conducted by Alexander Lazarev, he participated in the premiere performances of chamber works by Alfred Schnittke, Edison Denisov, Sofia Gubaidulina). Since 2003 he has been the first concertmaster of the bass section in the National Philharmonic Orchestra of Russia. Since 1990 he also performs as a soloist playing such works as Concertos for double bass and orchestra by E. Tubin, A. Eshpay, A. Koblakov, V. Dovgan, D. Grock. In 1995 he began teaching at the State Musical Pedagogical Institute named after M.M. Ippolitov- Ivanov. Since 2000 he has taught at the Tchaikovsky Moscow State Conservatoire. In 2000 he was awarded the title of “Honored Artist of Russia”.