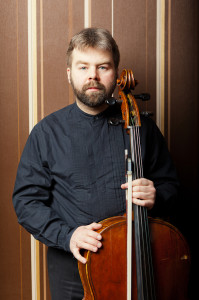 Nikolai Solonovich was born in 1970 in Moscow. After finishing his studies at the Gnessins Music School he entered the Tchaikovsky State Conservatory which he graduated from with honors and took the post-graduate courses there (classes of Professor N. Shakhovskaya). In 1992-2012 he had played in the "Soloists of Moscow" Chamber Orchestra under Yuri Bashmet. Since 2012 he has been the second concertmaster of the cello section in the National Philharmonic Orchestra of Russia. Nikolai Solonovich is the Associate Professor of the Chamber Ensemble and Quartet Department at the Moscow State Conservatoire. In 2001 he was awarded the Nunzio Freni Prize (Italy) as the best musician. In addition to classical music he plays other genres. He has recorded about 10 CDs as a soloist and an ensemble-player. In 2011 he was awarded the title of "Honored Artist of Russia".