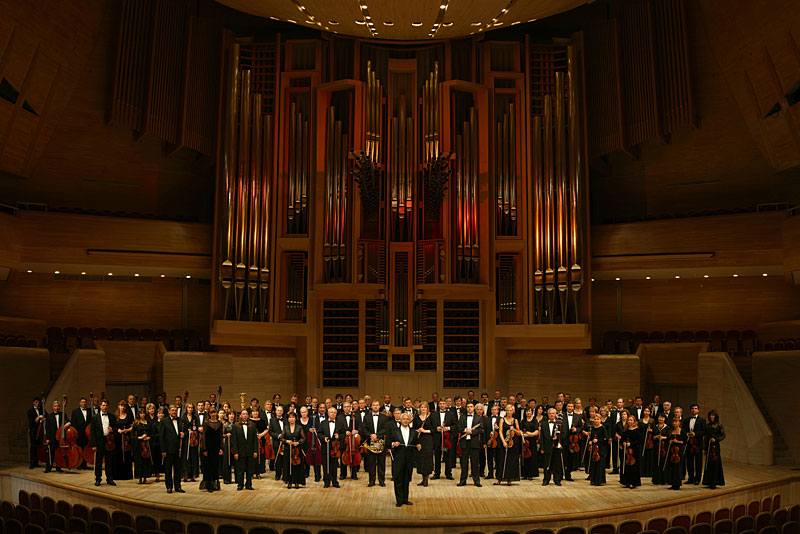 The National Philharmonic Orchestra of Russia (NPR) was founded in January 2003 by the Ministry of Culture. The Orchestra united top orchestra musicians and gifted youth. During the years of its activities, the NPR has succeeded in becoming one of the best symphonic orchestras of Russia and in gaining admiration from the audience and recognition from the professionals.

The Orchestra is headed by Maestro Vladimir Spivakov, a world-known violinist and conductor.

The NPR’s repertoire covers the period from early classical symphonies to the newest works of modern composers. In the course of eleven years the Orchestra has presented many exceptional projects, world premieres, unique transcription series and concert cycles.

In accordance with its status and name, the National Philharmonic Orchestra of Russia gives concerts not only in Moscow, but in various regions of Russia as well. The NPR ends up each season with a tour in Russia. Every year the NPR takes part in the International Music Festival in Colmar, France. The Orchestra has toured extensively over the CIS countries and the Baltic countries, in Europe, the USA, China and Japan.

In May 2005 the Capriccio Recording Company released CD and DVD of Isaak Schwartz’s Concert for Orchestra, titled “Yellow Stars”, recorded by the NPR under the baton of Vladimir Spivakov to whom the composer dedicated the work. In 2010-2016 Sony Classical released several NPR’s CD's with music of Tchaikovsky, Rachmaninoff, Rimsky-Korsakov, Grieg etc. In 2014-2021, a number of recordings of Russian music were released under the Spivakov Sound label, including the opera "Eugene Onegin" by Tchaikovsky, a triple CD with symphonic works by Tchaikovsky (Symphonies No. 4-6, "Italian Capriccio", "Romeo and Juliet"); the symphonic poem "The Bells" and the cantata "The Spring" by Rachmaninoff, as well as his complete Piano Concertos (soloist - Alexander Romanovsky); the albums "Holy Russia" (sacred works by Rachmaninoff and Taneyev), "Magic in Music" and "Masterpieces of Russian Music" (Lyadov, Stravinsky, Prokofiev, Mussorgsky, Rimsky-Korsakov, Scriabin). It is planned to release three Rachmaninoff's symphonies for the 150th anniversary of the composer's birth.