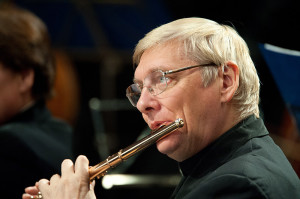 Sergey Bubnov graduated from the Tchaikovsky Moscow State Conservatoire (classes of Professor Yuriy Dolzhikov), then took post-graduate courses there. He was the winner of the International Competition "Prague Spring" (1977) and the International Festival of Youth and Students in Havana (Cuba, 1978). He worked at the Tchaikovsky Bolshoi Symphony Orchestra under Vladimir Fedoseyev, in the Russian National Orchestra under Mikhail Pletnev and Vladimir Spivakov; he played in the chamber ensemble "Concertino" under the leadership of Korsakov and the RNO Soloists Ensemble. He performed as soloist with the BSO, RNO, the Prague Chamber Orchestra under Vladimir Valek and other collectives. Sergey Bubnov has made a series of records, including the Concerto for flute and orchestra by J. Ibert, chamber music by S. Prokofiev and by J. S. Bach. Since 2010 he teaches at and manages the department of woodwind instruments at the B. Blazhevich Music School. The musician was awarded the title of "Honored Artist of Russia".