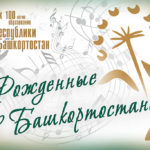 The Republic of Bashkortostan celebrates its 100th anniversary in 2019. Large-scale festive activities to commemorate the significant date in the history of the Russian federalism are planned to be held not only in the region itself, but also in Moscow.