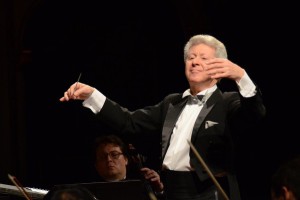 Born in 1942, Vladimir Simkin studied first the violin and clarinet, then conducting at the Novosibirsk and Moscow Conservatories. Since he received his diploma from the Moscow Conservatory, he has conducted many Russian orchestras, both in musical and choreographic works. He has also made many recordings. Vladimir Simkin regularly goes on tour with his orchestras throughout the world, and in particular in Western Europe, Asia, South America, and South Africa. An eclectic artist, he conducted a gala honouring Michel Legrand in Moscow in 1997.

Since 2004, Vladimir Simkin has regularly conducted the National Philharmonic Orchestra of Russia.