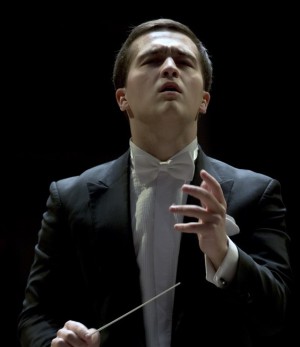 9 February 2016 | The “Philharmonia-2” Concert Hall Subscription series № 95 Soloist – Timur Pirverdiev, violin Conductor – Timur Zangiev Bizet. L’Arlésienne” Suite No. 1 Chausson. Poème, op. 25 Rimsky-Korsakov. Schecherazade, op. 35 BUY TICKET The NPR opens a new subscription series at the Concert Hall in Michurinsky Avenue. Last season, the giant concert holding Moscow Philharmonic Society, who had worked at nine venues of the city, expanded its geography and added a tenth venue - the "Philharmonic-2" Concert Complex with the Great Hall, named after great Russian composer Sergey Rachmaninoff, designed for 1000 seats. In terms of functionality it is not inferior to the best metropolitan halls for in its construction Russian and German specialists in acoustics used the most advanced technologies. The NPR was one of the first orchestras to give concerts there and this year it continues its initiative. The NPR's Subscription Series №95 fully meets the democratic repertoire policy of the new hall with such hits as «Scheherazade" by Rimsky-Korsakov, Chausson's Poem or Bizet's music for "L'Arlesienne", which the audience is willing to listen to again and again. The concerts will feature rising stars of Russian performing arts, as well as participants of the NPR conductor-training group which includes Timur Zangiev. Timur Pirverdiev, a former student of Maya Glezarova and Eduard Grach, prize-winner of international competitions, took recently the position of the concertmaster of the National Philharmonic Orchestra of Russia. Timur Zangiev, a student of Gennady Rozhdestvensky, is currently the permanent guest conductor of the Samara State Philharmonic Orchestra and a conductor of the Stanislavsky and Nemirovich-Danchenko Academic Music Theatre, the prize-winner of the II Russian Music Competition in Moscow (2015, 3rd Prize).