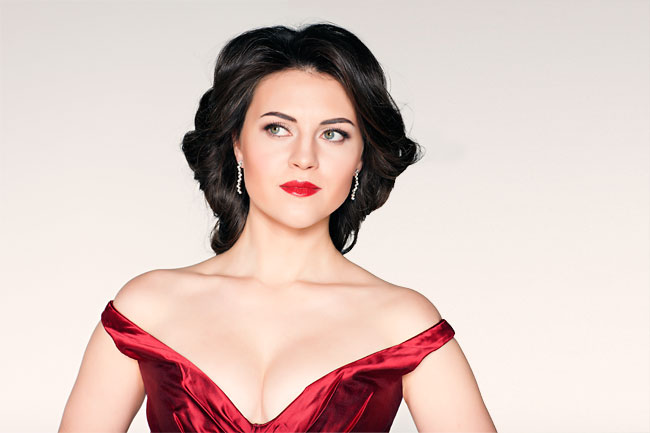 April 2, 2016 | Svetlanov Hall of the Moscow International Performing Arts Center "Grand Opera Gala" Subscription Series Venera GIMADIEVA, soprano Sergey ROMANOVSKY, tenor Conductor - Alexander SOLOVIEV G. Rossini, V. Bellini, G. Donizetti, G. Verdi, P. Mascagni, Ch. Gounod etc. BUY TICKET "She is a soprano of huge presence, compelling to watch..." in these words The Guardian, the British newspaper, described the debut of Venera Gimadieva in Glyndebourne. At the famous Opera Festival the singer triumphantly sang Violetta in Verdi's “La Traviata”, and the part has now become her “visiting card”. She has sung it at the Royal Opera House “Covent Garden” in London, the Budapest Opera House, the Royal Theatre in Madrid, the Bolshoi Theatre in Moscow, etc. "Venera Gimadieva... responsible for giving life to the famous character (Violetta) was a real hero on stage " - wrote the GB Opera Magazine, whereas the Spanish “Codalario” Magazine admired "her rich voice, body and harmonics which allowed her to convey the abandonment of love." The artiste is sought after by the best European theaters, while the Bolshoi Theatre made her one of the leading soloists of its opera troupe. In 2012 the singer was granted the Award of the President of the Russian Federation "for outstanding artistic mastership, enriching and developing the traditions of Russian vocal school." In 2015, Venera got a prize at the competition of opera singers in Paris. Her partner on the stage, tenor Sergey Romanovsky, a fine bel canto singer, is also solidly building his international career. It started with a brilliant debut at La Scala, when in 2009 he performed the highly virtuosic part of Count Libenskof in Rossini's "Il viaggio a Reims" (conductor - Ottavio Dantone). Today, he sings most compelling parts at the Bolshoi and the Mikhailovsky Theaters in Russia, as well as at well-known European venues from La Scala and the Norwegian Opera to the Salzburg Festival. Last year Sergey sang the Duke of Mantua in "Rigoletto" by Verdi at the Bolshoi Theater. 'His voice suits well the Duke – an Italian lyric tenor of a very pleasant timbre,' - says "The Vedomosti ". - 'The famous “Questa o quella” aria sounded downright exemplary.' This so intriguing a duo will be accompanied by the National Philharmonic Orchestra of Russia under the baton of Alexander Soloviev. This young conductor, the winner of the D. Mitropoulos Competition in Athens, an assistant conductor at the Bolshoi Theatre, the director of the Orchestra of the Gnessins Russian Academy of Music, formerly a member of the NPR's conductor-training group, has become a permanent artistic partner of the NPR, especially loved by vocal soloists as a sensitive, attentive and highly professional accompanist, who owns a huge repertoire.