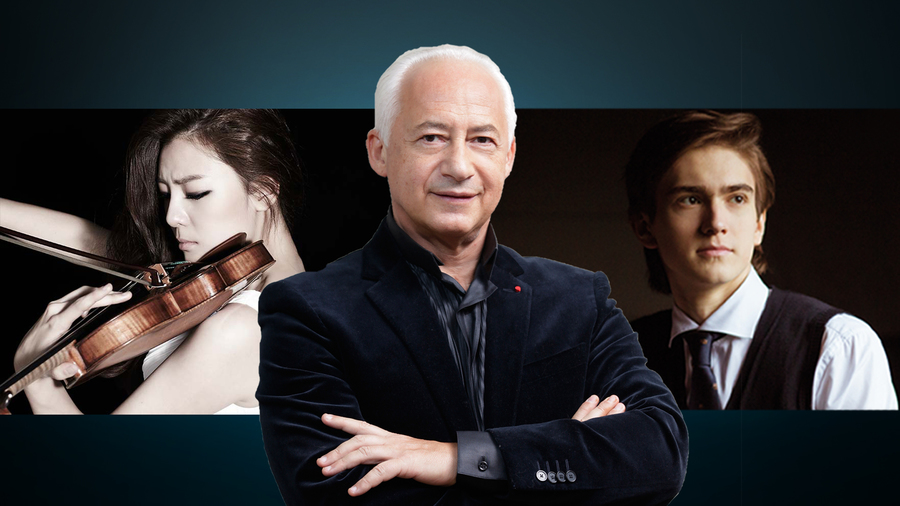 December 22, 2016 | Svetlanov Hall of the MIPAC Clara-Jumi KANG, violin (Germany) Daniel KHARITONOV, piano Conductor – Vladimir SPIVAKOV E. Grieg. Peer Gynt Suite № 1, op. 46 E. Grieg. Piano concerto in A minor, op. 16 H. Wieniawski. Concerto № 2 in D minor, op. 22 C. Saint-Saëns. Introduction and Rondo Capriccioso in A minor, op. 28 P. Sarasate. Gypsy Airs, op. 20 BUY TICKET Vladimir Spivakov and the National Philharmonic Orchestra of Russia always follow attentively the main musical contest of the country, i.e. the International Tchaikovsky Competition. The Maestro has often supplied "valuable resources" to the Competition, supported future competitors, allowing them to "warm-up" on the stage, as well as contributed to the further development of prize-winners, inviting them to participate in his projects. In December two bright outstanding performers, award-winners of the XV edition of the Tchaikovsky Competition, will appear at the stage of the Svetlanov Hall. They are pianist Daniel Kharitonov and violinist from Germany Clara-Jumi Kang. During the Competition, Clara-Jumi Kang, a pupil of the famous pedagogue Zakhar Bron, drew close attention from the very first auditions, becoming the unconditional favorite among the violinists with the audience. However the Jury awarded her only the Fourth Prize and the special prize for the best performance of a Mozart Concerto with a chamber orchestra, while many professionals recognized her superiority, including Vadim Repin, a Jury member,. "The competitors are trying to copy, to imitate or simply to play as clean as possible, - said Repin. - They are obviously lacking in their own ideas and feelings. Clara-Jumi Kang is an exception. There have been some absolutely crazy ideas in her rendition but it is her style, even her vital position, and she has convinced me." Clara-Jumi made her debut with the NPR last November at the "Vladimir Spivakov Invites ..." Festival in Moscow, and then performed triumphantly at the International Music Festival in Colmar (France). Daniel Kharitonov is regarded as one of the most promising young musicians of Russia. He entered the circle of Vladimir Spivakov's constant artistic partners when still a boy, becoming a grant-recipient of the Vladimir Spivakov Charity Foundation and getting the opportunity to study at the Central Music School at the Moscow Conservatory in the class of Professor Valery Piasecki. He won the Grand Prix at the XI International Television Competition "The Nutcracker". In 2015, the 16-year-old pianist won the Grand Prix at the Moscow International V. Krainev Piano Competition and the Bronze Medal at the XV International Tchaikovsky Competition. His talent was highly appraised by such grands of the Russian piano school as Boris Berezovsky, Denis Matsuev, Ekaterina Mechetina and others. Daniel will celebrate his 18th birthday on the stage of the Svetlanov Hall on 22 December.