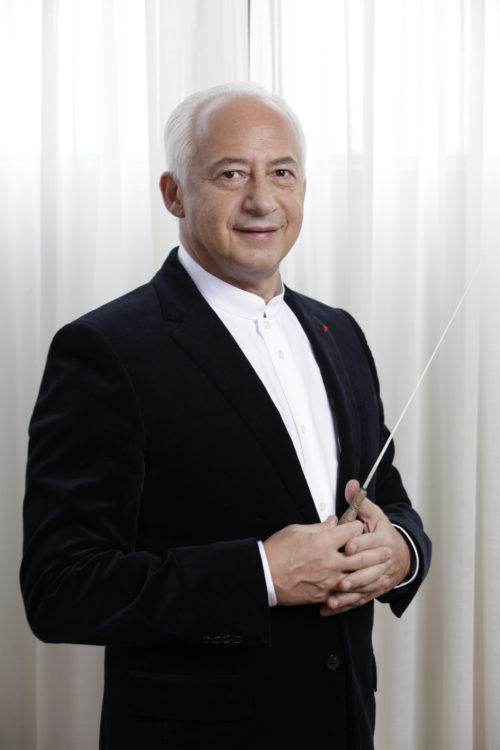 January 24, 2017 | Svetlanov Hall of the MIPAC The VII Moscow Christmas Festival of Sacred Music Academical Great Choir «Masters of choral singing» Artistic Director – Lev Kontorovich Soloists: Anna Aglatova, soprano Svetlana Shilova, mezzo-soprano Alexey Nekludov, tenor Oleg Tsybulko, bass Conductor – Vladimir Spivakov  Saint-Saëns. Ave Maria  in G major (1865), arranged by Alexey Strelnikov  Saint-Saëns. Requiem for soloists, choir and orchestra  Saint-Saëns Ave Maria in F major, Op. 145 (1914), arranged by Alexey Strelnikov  Tchaikovsky. Symphony No. 5 in E minor, Op. 64 BUY TICKET The Seventh Moscow Christmas Festival of Sacred Music will come to its finale traditionally with its Artistic Director, People's Artist of the USSR, Vladimir Spivakov conducting the National Philharmonic Orchestra of Russia and the famed choir "Masters of Choral Singing". From year to year the Maestro and the collectives led by him perform outstanding musical works of various ages, national schools and church customs, making the public familiar with the centuries-old heritage of Christian music. The closing concert of the Seventh Festival will feature works by Saint-Saëns and Tchaikovsky, with the participation of brilliant soloists of the Bolshoi Theatre and  Kolobov's "New Opera". Vladimir Spivakov has combined the music of these authors in one programme deliberately. The Russian composer and his French colleague were well acquainted and treated the work of each other with affectional attention. Tchaikovsky wrote about Saint-Saëns as of a rare representative of "the idea of progress in music" who combined "a wonderful gift of a composer with an elegant virtuoso talent and extensive musical erudition." Saint-Saëns considered Tchaikovsky to be "a most humble and most aimable of all  people" and a great master endowed with a supreme skill and talent. Saint-Saëns had given almost 25 years to church service, played the organ and composed sacred music. He wrote about ten different compositions only on the text of «Ave Maria». However his Requiem, written in 1878, was an exception from the opuses created for his service needs. Saint-Saëns wrote it to the memory of Albert Libon who had bequeathed a large sum to the composer so that he could leave the service and devote himself to composing. "Saint-Saëns kept his word and fulfilled the will of his friend, acting as a decent man. One hears humaneness in this music, - says Vladimir Spivakov. - As for Tchaikovsky's Fifth Symphony it is, from my point of view, a spiritual work. This is one of the most tragic works of Tchaikovsky's, created in the period of his most intense and deep thinking about the principal questions of life - faith and morals, an artist's duty and mission, life in work and noble death, struggle or yielding to Fate”. On closing the Sixth Moscow Christmas Festival of Sacred Music on January 23, 2016, the NPR under the baton of Vladimir Spivakov played Tchaikovsky's Sixth Symphony. The video recording is here: