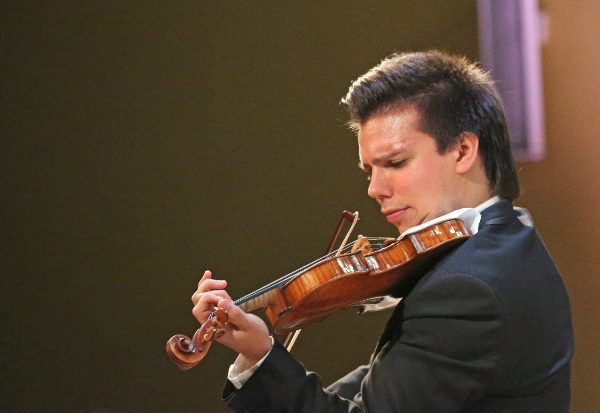 January 30, 2017 | The Tchaikovsky Concert Hall The NPR's Subscription Series No.17 Soloist – Sergey Dogadin, violin Conductor – Vladimir Spivakov Ravel. Valses nobles et sentimentales Saint-Saëns. Introduction et Rondo Capriccioso for violin and orchestra Chausson. Poème for violin and orchestra, Op. 25 Fauré. Pavane, Op. 50 Ibert. Paris, symphonic suite Рravel. La Valse, choreographic poem Vladimir Spivakov is well known as a connoisseur and an appreciator of French culture. For many years he has been directing the Festival in Colmar in Alsace, spanning a musical bridge between the two countries. The upcoming concert provides a great opportunity to perceive the intriguing process of the Maestro's immersion into French music. Works by Ravel (Valses nobles et sentimentales) and Fauré (Pavane) cast a glimpse from their time at the charming music of the past. Léonide Massine based one of his choreographic productions for the "Russian Seasons" by Sergei Diaghilev on Fauré's Pavane in 1917. The same stage fate had been expected for Ravel's La Valse, however, Diaghilev found it unsuitable for dancing. But this dramatic epitaph to Vienna, the capital of waltzes, composed after the First World War, has become extremely popular as a concert piece. The musical picture of Paris, created by Jacques Ibert, will also embellish the French programme. The composer draws his favorite city from different points of view, depicting its live nature and observing its sights. The Suite consists of six parts: 1. Le Métro 2. Les Faubourgs. 3. La Mosquée de Paris. 4. Restaurant au Bois de Boulogne. 5. Le Pâquebot Île de France. 6. Parade foraine. The two pieces in the programme, written for violin and orchestra, were inspired by great violinists. Saint-Saëns dedicated his Introduction et Rondo Capriccioso to his friend, Spanish virtuoso Pablo Sarasate (thus Spanish motifs are distinctly heard in the music), whereas Chausson addressed his exciting Poème to Belgian Eugene Ysaye. Sergey Dogadin has been invited as the soloist. The violinist is a prize-winner of several musical contests: the Tchaikovsky Competition in Moscow, the Glazunov Competition in Paris, the Concorso Postacchini in Fermo (Italy), the Dombrovski Competition in Latvia, the Paganini Competition in Moscow, the Yankelevich Competition in Omsk (Russia) and the I. Stern Competition in China. “I am sure that Dogadin has great prospects” - says Vladimir Spivakov, who has invited the violinist many a time to take part in his concerts in Moscow and the regional festivals “Vladimir Spivakov invites...”