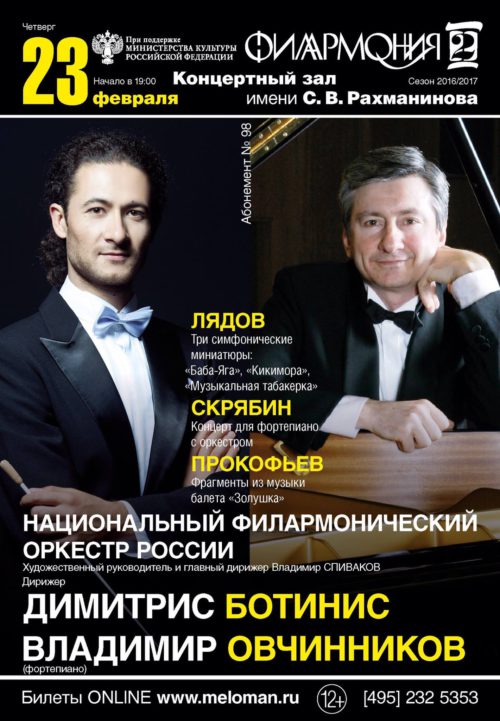 February 23, 2017 | Rachmaninoff Concert Hall (Philharmonia- 2) Subscription Series No.98: The National Philharmonic Orchestra of Russia Soloist – Vladimir Ovchinnikov, piano Conductor – Dimitris Botinis Liadov. «Baba Yaga», «Kikimora», «Musical Snuff Box» Scriabin. Concerto for piano and orchestra in F-sharp minor Prokofiev. Fragments from the ballet “Cinderella” BUY TICKET On the 23th of February Dimitris Botinis will have his debut on the podium of the National Philharmonic Orchestra of Russia. He is known to music lovers as an Assistant to Yuri Simonov; he is a winner and a holder of all special prizes of the 2006 Antonio Pedrotti International Conducting Competition (Concorso Internazionale per direttori d'orchestra) in Italy, and the winner of the First All-Russian Music Competition in the "Opera and Symphony Conducting" nomination (Moscow, 2011). "Inspired, charismatically gifted, a fine musician with the conductor's art in his blood! The highlight of his performance was "The Firebird" by Stravinsky: the depth of knowledge and understanding of the score seemed boundless in his interpretation" – this is a review from the Polish press. Since 2015 Dimitris Botinis has been the Chief Conductor of the V. Safonov North Caucasus Philharmonic Orchestra. Under Dimitris Botinis's baton the NPR will perform popular works by Russian classics - Liadov, Scriabin and Prokofiev. The soloist in Scriabin's Piano Concerto will be People's Artist of Russia Vladimir Ovchinnikov, Professor of the Moscow Conservatory and Sakuё University (Japan), a prize-winner of international contests, the Director of the Central Music School of the Moscow City in 2011-2016. Influential critics note Vladimir Ovchinnikov's "personal style and high flexibility", his "transcendental virtuosity" and "the gift of simplicity", which are the marks of masters of the highest class; they also find reasons to compare the pianist to Rachmaninoff, Prokofiev and Chopin. "Anyone who has ever heard Vladimir Ovchinnikov’s playing – that of a keenly sensitive and expressive pianist – perceives perfection of form, purity and power of sound, which are born of his fingers and his intellect”, – this statement of the Daily Telegraph largely reflects the brilliance and ingenuity of the musician, a worthy successor of the famous Heinrich Neuhaus Piano School.