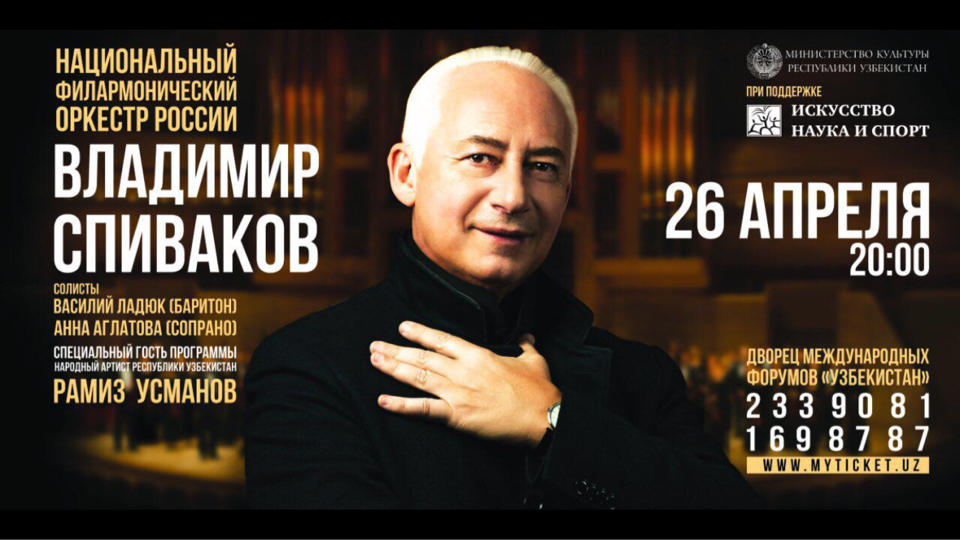 On the 26th of April the National Philharmonic Orchestra of Russia will appear in Tashkent: the concert will take place at the Palace of International Forums “Uzbekistan”. The NPR will be led by its Artistic Director and Principal Conductor Vladimir Spivakov.

The night will be another clear evidence of the effective collaboration of Uzbekistan and the Russian Federation:  on the stage there will meet brilliant musicians, the soloists of top Moscow Opera Houses  Anna Aglatova (soprano) and  Vasily Ladyuk (baritone) and a special guest People's Artist of Uzbekistan Ramiz Usmanov (tenor).

The concert is organized within the framework of the Program of Cooperation between the Governments of the Republic of Uzbekistan and  the Russian Federation in the cultural and humanitarian domain and also for the purpose of wider coverage and introduction of  the dramatic art of leading Russian theaters to the audience with the support of the Ministry of Culture of the Republic of Uzbekistan and Alisher Usmanov's Charitable Foundation “Art, Science and Sport”. The Foundation was formed with the target of promoting the organization of socially significant events in the field of art, culture and sports, as well as the execution of various scientific, educational and social projects.

Vladimir Spivakov has visited the capital of Uzbekistan many times and keeps the warmest memories of each meeting. "I really love Tashkent and this country which is a hospitable, generous, peaceful and quiet land," says the Maestro. - “Uzbekistan can be proud of its gifted youth. People admire the worthy participation of such talented Uzbek musicians as Nadir Khashimov and Aziz Shokhakimov in international contests, held abroad, also in Russia.. During my visit to the Center of National Arts, I got convinced that the  people here  highly appreciate the national culture, the spiritual heritage, the arts and traditions of each region of Uzbekistan ... all artistic trends are at a high level, in particular, the school of orchestral conducting. The great attention paid to the sphere of musical arts in Uzbekistan bespeaks the concern for the future of the country, the spirituality of the people, the upbringing of the harmoniously developed young generation. I would like to note especially that the Uzbek audience feel the music deeply and intensely, they just venerate arts."