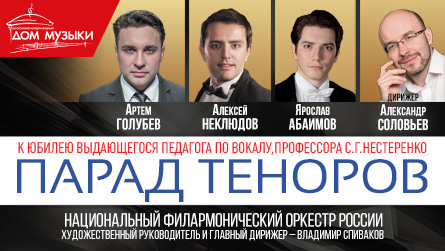 April 13, 2017 | Svetlanov Hall Favorite Music Series Parade of Tenors. A Tribute to Professor Svetlana Nesterenko Alexey NEKLYUDOV, Artem GOLUBEV, Yaroslav ABAIMOV Conductor – Alexander SOLOVIEV Tchaikovsky, Arensky, Bizet, Rossini, Puccini, Donizetti, Verdi and others. Detailed program see in Concerts. BUY TICKET Many talented artists start working with Vladimir Spivakov's Orchestra at the beginning of their artistic careers, get involved into the NPR's various projects and tours, and then, having widened their repertoire and polished their skills, become welcomed participants in other concerts. With time, once “second role” debutants are getting more and more prestigious engagements, winning the stages of the world's top opera houses. Among the artists, to whom the NPR's management pays special attention and provides professional assistance, one certainly finds students of Professor Svetlana Nesterenko, one of the best masters of vocal coaching. Svetlana Nesterenko is the Head of the Solo Singing Department at the Academy of Choral Art, teaches at the Youth Program of the Bolshoi Theater and at the International Music Academy in Minsk. The "Parade of Tenors" with the participation of the NPR under the baton of Alexander Soloviev (a conductor of the Bolshoi Theater and a former member of the NPR's conductor-trainee group) will be a musical offering to the famous teacher on her anniversary. For every singer who builds opera singing skills, the role of a coach is truly priceless. A wise mentor not only initiates beginners into the basics of mastership, but remains an indispensable guru even for established artists. Svetlana Nesterenko is a unique master, whose name is the stuff of legends. No wonder that many of Mrs Nesterenko's students, who have achieved world fame, continue their studies with her, asking for her aid before important performances. Svetlana Nesterenko not only improves vocal prowess, but also tempers students' characters, encourages them to broaden their horizons, polish acting skills and foreign languages. She never gets tired of repeating to her pupils that merely a beautiful voice is not sufficient for today's opera world. The wide recognition of Svetlana Nesterenko's authority and expertness is affirmed by the successes of her students. Tenor Alexei Neklyudov, who passed through Mrs Nesterenko's class at the Gnessin College and then at the Academy of Choral Art, is one of the leading soloists of the Novaya Opera Theater and a guest soloist at the Bolshoi Theater. He has won awards at many competitions, in 2011 he was bestowed a charity grant of the NPR with which he is cooperating regularly and fruitfully. Yaroslav Abaimov, a graduate from the Academy of Choral Arts, became Svetlana Nesterenko's student in 2004, today he is also a soloist of the Novaya Opera Theater, a prize winner of international competitions, who made his debut at the Bolshoi Theater two years ago and is a guest soloist of the Nederlandse Reisopera (Netherlands). Along with these two pupils of Svetlana Nesterenko, another young tenor, whose career is rapidly gaining momentum, will take part in the concert. It is Artem Golubev, a winner of international competitions and a soloist of the Perm Opera and Ballet Theater.