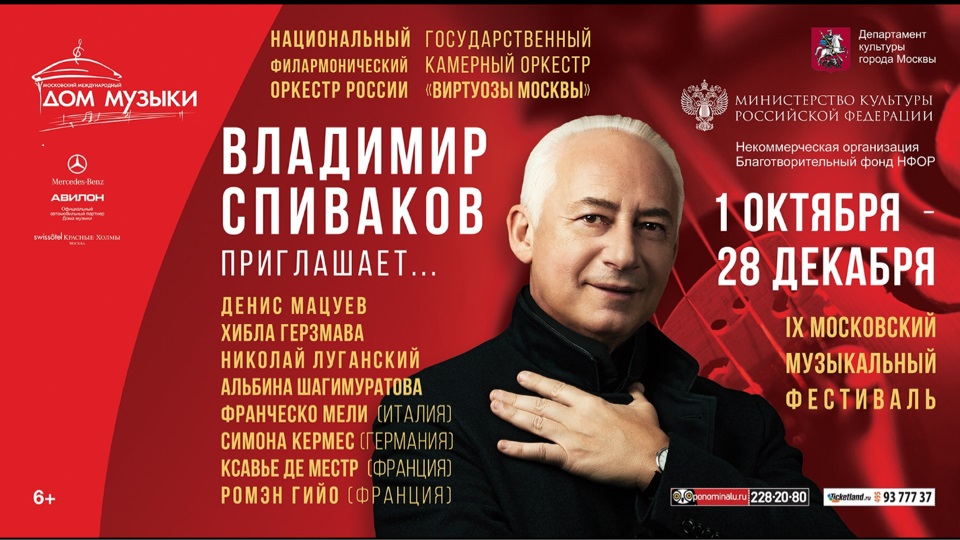 As usual most of the Festival's concerts will be delivered by the National Philharmonic Orchestra of Russia, with two programs given to the "Moscow Virtuosi" Chamber Orchestra. Both Orchestras will be conducted by Vladimir Spivakov himself. In accordance with the Maestro's plan, musical masterpieces of the eighteenth and nineteenth centuries will dominate in the affiche.

In October, the audience will hear European stars: coloratura soprano from Germany Simone Kermes and French musicians Xavier de Maistre (harp) and Romain Guyot (clarinet). The Russian performing school will be represented at the Festival by celebrated pianists, winners of the Tchaikovsky International Competition, Denis Matsuev and Nikolay Lugansky.

On one of the Festival evenings, Vladimir Spivakov will put aside his conductor baton in order to play his magnificent Stradivari violin. In the ensemble with Denis Matsuev he will perform Violin Sonatas by Brahms and Franck - gems of chamber music, belonging to the most sophisticated opuses in the entire violin repertoire.

The luminaries of the Festival traditionally include also outstanding singers. Vladimir Spivakov is well known for his passion for vocal programs and cooperation with extra-class singers. At the Ninth Festival on the same stage with the Maestro there will shine Hibla Gerzmava, Albina Shagimuratova, Alexey Tatarintsev and Dmtiro Popov, who will offer a profound and exquisite repertoire.