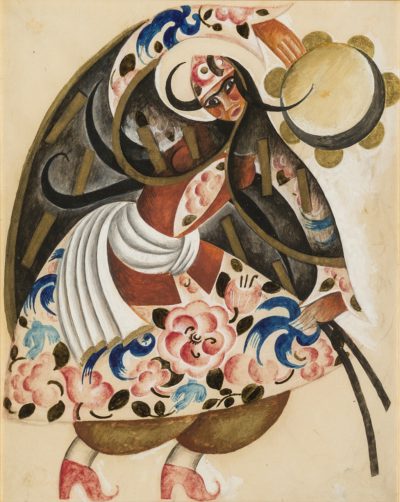 The latest exhibition at the Museum of Russian Impressionism has been organised together with the world-famous violinist and conductor Vladimir Spivakov and is based on his private collection. Until now, the collection was only known to a close circle of the maestro’s friends. The artworks which he has collected over many years will go on show to the general public for the first time.

Vladimir Spivakov has not simply lent works for the exhibition, but played an active role in creating it. The broad scope of his thinking and his interest in a number of art forms characterise Spivakov the collector. The range of artworks in the collection was the starting point for the exhibition concept, which can be expressed using the phrase “unity in variety”.

Avocations comprises more than 90 works, from eminently collectable Russian painting and drawing of the late nineteenth and early twentieth centuries to artworks which rarely draw the attention of Russian collectors. It includes a unique selection of nineteenth-century western European folk religious reverse paintings on glass. Such “glasses” were extremely popular, both as church decoration and for private devotion. Brightly-coloured and reflecting light, they brought a mystical atmosphere to the gloomy interiors of peasant homes. Spivakov began to collect reverse glass devotional paintings in Colmar, the venue for his annual international music festival. The exhibition includes 21 “glasses” with images of saints and scenes from the life of Jesus Christ.

Vladimir Spivakov’s approach to collecting is free of clichés. His open-mindedness means that Spivakov does not fear contemporary art, something many collectors avoid. Works by nonconformist artists of the post-war period such as Ernst Neizvestny, Vladimir Nemukhin, Boris Sveshnikov, and other representatives of what is sometimes called “other art”, blend organically with the “classical” part of the collection.

Few know that Vladimir Spivakov was a keen painter as a teenager and had to make a choice: to become a musician or an artist. Despite choosing music, he did not lose interest in visual art.

“Back then I loved painting and I was pretty good. I excelled at still life and landscape painting and enjoyed it so much that I started skipping school to spend time in museums, mostly the Tretyakov Gallery. I could sit at my easel for six hours, but I never spent that long playing the violin. Yuri Isaevich Yankelevich, my violin teacher at the Central Music School, put a stop to my hobby. He once came across me on Rozhdestvensky Boulevard, dressed in a padded jacket and carrying my easel. Professor Yankelevich asked where I was going and I said that I was off to do some painting. The next day, I arrived for my music lesson and he said: ‘You either paint or play the violin’. I chose the violin, and after rejecting painting I had a constant feeling of something left unsaid”.

For Spivakov, music and painting are so closely bound together that an artwork can bring up unexpected associations, harmonising with one or another piece of music. He believes Saint Petersburg artist Alexander Grigoriev’s kinetic object to be an embodiment of the Music of the Spheres.

“Grigoriev’s works are minimalistic. They remind me of Arvo Pärt’s music. I love his Mutual Passing Through, it ‘sounds’.”

A group of works on paper reveal the image of women dancing. Sergei Vinogradov’s Spanish Dancer is a study for the painting in the Museum of Fine Arts of the Karelian Republic. The model was Carolina Otero, a fine actress and symbol of the Belle Époque, who was popular in Europe during that period.

“I lived and worked in Spain for three years with the Moscow Virtuosi Chamber Orchestra. I love everything that is connected with Spain and its culture. When I saw Spanish Dancer, I knew I had to have it for my collection. The strong pose and dramatic chiaroscuro make this a wonderful work, even though it’s a study”.

The collection is full of personal stories. Spivakov was given Artur Fonvizin’s Circus Woman by the artist’s widow, and artist Lado Gudiashvili presented him with his Female Portrait. Spivakov’s connoisseur’s eye enables him to find treasure even at flea markets, which is where he bought several watercolours by Alexander Serebriakov, the son of artist Zinaida Serebriakova.

The exhibition aims to create within the Museum of Russian Impressionism a space in which artworks from Valdimir Spivakov’s collection and recordings of his performances produce an atmosphere of audio-visual harmony.