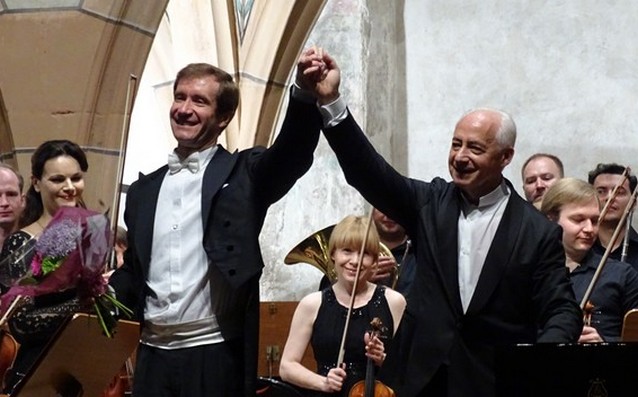 Beethoven's music sounds everywhere, everyone seems to know everything about his life and work. Beethoven's works are an important part of the repertoire of Vladimir Spivakov and the National Philharmonic Orchestra of Russia, several years ago even devoting a special  subscription series to the composer. And yet Beethoven is a Sphinx,  whose riddles are stlll very far from being answered, while the exhaustion of his heritage is nothing more than a myth. Every great master is trying to say a new word about Beethoven right now, when his manuscripts are being revised and the essential connotations of his letters, dedications,  remarks in the scores and the note signs themselves are revealed.

Beethoven's Seventh Symphony and Fourth Piano Concerto comprise a special concert program. Vladimir Spivakov, the NPR and Nikolai Lugansky performed it in the concert for the 150th anniversary of the Moscow Conservatory in the Great Hall, and that evening was a landmark event in the cultural life of the Russian capital. Perhaps the secret of the success is in the musical affinity   between Vladimir Spivakov and Nikolai Lugansky. For the first time the pianist performed with the Maestro and his orchestra at the Festival in Colmar (in the summer of 2009), and since then  joined the closest circle of permanent artistic partners.  Vladimir Spivakov plays also in duets with Nikolai.

The Winner of the 10th Tchaikovsky Competition, Nikolai Lugansky is one of the leaders of the modern piano school, a People's Artist of Russia, a Professor of the Moscow Conservatory. "The main thing in his playing is the refinement of taste, stylistic and textual perfection ...," says the Boston Globe. - "The instrument sounds like a whole orchestra, and you can hear all the scales and nuances of orchestra voices." German newspaper Bonner Generalanzeiger echoes: "... Lugansky clearly has technical capabilities that will make most of his colleagues pale. The work of his fingers is accurate, the touch is exquisite, the use of the pedal is deliberate. But Lugansky is not only brilliant virtuoso, first of all he is the pianist who  absorbs in music for beauty ... ". The leading French music critic Alain Lompech wrote about him: "Lugansky is not just the most remarkable Russian pianist of our time, he is one of the most outstanding artists of our era ...".