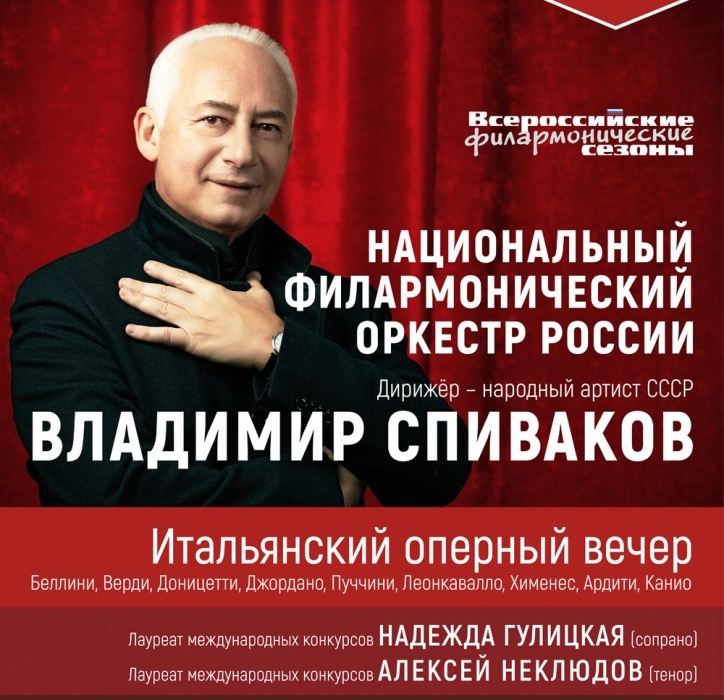 On November 11, 2017, the National Philharmonic Orchestra of Russia will start its touring series in the Russian provincial regions. Within five days the NPR's concerts under Vladimir Spivakov will take place in five towns - Penza, Kuznetsk, Saransk, Ulyanovsk and Samara (see Schedule and Detailed Program below). The tour is held within the framework of the "All-Russian Philharmonic Seasons" Project of the Ministry of Culture of the Russian Federation, working since 2003 in collaboration with the Moscow Philharmonic Society. This peculiar artistic venture is aimed at reviving concert activities throughout Russia and ensuring equal access to cultural values for inhabitants of various regions of our country.
The NPR's tour will feature wonderful soloists of Moscow musical theaters, winners of international competitions Nadezhda Gulitskaya (soprano) and Alexei Neklyudov (tenor). The audiences will hear famous opera arias, duets, Neapolitan songs, overtures and orchestral scenes from operas by Bellini, Donizetti, Verdi, Puccini and other composers.

Nadezhda Gulitskaya is a member of the Elena Kamburova Theater of Music and Poetry. She graduated from the V.S.Popov Academy of Choral Art. The Grand Prix winner of the Third Independent International Opera Competition in Moscow (2011), she made her Bolshoi Theater debut as the Queen of the Night in Mozart's opera The Magic Flute in 2013. She has worked with many outstanding musicians and conductors of our time such as Vladimir Spivakov, Yuri Temirkanov, Vladimir Fedoseev, Helmut Rilling, Krzysztof Penderecki and others. She sings with well-known orchestras and in recitals.

Alexei Neklyudov is a soloist of the E.V. Kolobov "New Opera" Moscow Theater and a welcome guest at the Bolshoi Theater of Russia. He graduated from the V.S. Popov Academy of Choral Art. In 2010 he debuted with the NPR on the stage of the Great Hall of the Moscow Conservatory, singing the tenor part in the C. Saint-Saëns Requiem, while in 2012 he received the NPR's Grant for young musicians. He is also a prize-winner of the A.D. Vyaltseva All-Russian Vocal Competition (2005), the A. Pirogov Open Competition of Young Vocalists (2007), the XV Bella Voce International Vocalists Contest (2007), the II "Contemporary Art and Education" International Contest-Festival (2007), the "Hopes, Talents, Masters" -Dobrich (Bulgaria, 2008). a Diploma-holder of the Delphic Games in Novosibirsk (2008) and in Minsk (2008).