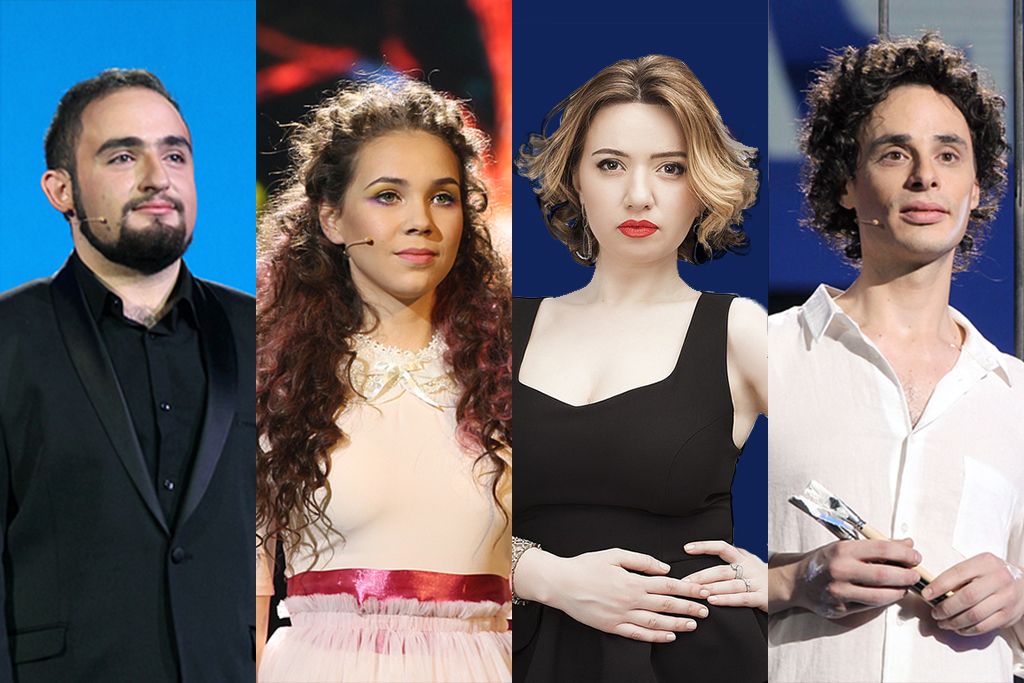 The Bella voce Subscription Series at the Moscow Performing Arts Centre presents a Gala Concert of the most sparkling members of the very popular TV show "The Grand Opera".
Vladimir Spivakov, who once introduced to the general public then very young Vasily Ladyuk and Dmitry Korchak, has not lost interest in discovering new stars rising on the vocal horizon. Such singers come to light in the “Grand Opera” TV Show at the "Culture" Channel (Russia-K), the only professional TV contest for young classical vocalists. The compelling modern project, the "Grand Opera" combines a show and an academic concert, attracting different categories of viewers to the silver screen. In the 2016 Season Finals (accompanied by the NPR under the baton of Vladimir Spivakov and his colleagues), the contestants were Tigran Ohanyan, Yuri Gorodetsky and Ksenia Nesterenko who won the vote of the audience. Marika Machitidze, also a participant of the Show, did not get into the finals, but she won the love of the audience and was one of the winners in the online contest “The Most Fascinating Image”.
In the 2017/2018 season the NPR will perform twice with the finalists of the "Grand Opera" Show, and the first concert will be held at the Moscow Performing Arts Centre. On the NPR's conductor podium there will be Alexander Soloviev, a conductor who works also at the Bolshoi Theater, the Galina Vishnevskaya Center for Opera Singing, and is the Assistant Professor at the Gnessins Academy of Music.

Ksenia Nesterenko is a student of the Saratov Conservatory, and already a soloist at the Saratov Academic Opera and Ballet Theatre. She was coached at the Monte-Carlo Opera Academy. The holder of the Grand Prix and the winner of the TV Show "The Grand Opera – 2016", she was recently awarded a Gold Prize at the Manhattan Music Competition in New York.

Marika Machitidze is a graduate from the Tbilisi Conservatory, a soloist at the Z. Paliashvili Tbilisi State Opera and Ballet Theatre. She has studied with well-known teachers in Italy and France. A prize-winner of the Georgian Republican Competition (III prize) and the winner of the Lado Ataneli International Competition.

Tigran Ohanyan graduated from the Yerevan Conservatory, participated in the YAVA program at the Houston Grand Opera. He is a recipient of special prizes of the Delphic Games in Yerevan, the Young Opera Singers Competition in St. Petersburg, the Prize of the President of Armenia, a special prize of the G. Vishnevskaya Competition in Moscow. A Bronze medalist of the Delphic Games in Astana. The winner of the Grand Prix of the 3rd Minsk International Christmas Contest of Vocalists and the Prize of the jury of the "Grand Opera" TV Show (2016).

Yuri Gorodetsky is a soloist at the Bolshoi Opera and Ballet Theatre of the Republic of Belarus. He graduated from the Belarusian Academy of Music, then studied at the Higher Institute of Music in Modena. Trained in France and Belgium, he was a member of the Youth Program at the Washington National Opera. A winner of the S. Moniuszko International Competition in Warsaw, the L.P. Alexandrovskaya Competition in Minsk, the R. Yakhin Competition in Kazan, the Queen Elisabeth Competition in Brussels. A prize-winner of the Open All-Russian Competition of Vocal and Piano Duets in St. Petersburg, and of the F. Viñas Competition in Barcelona.