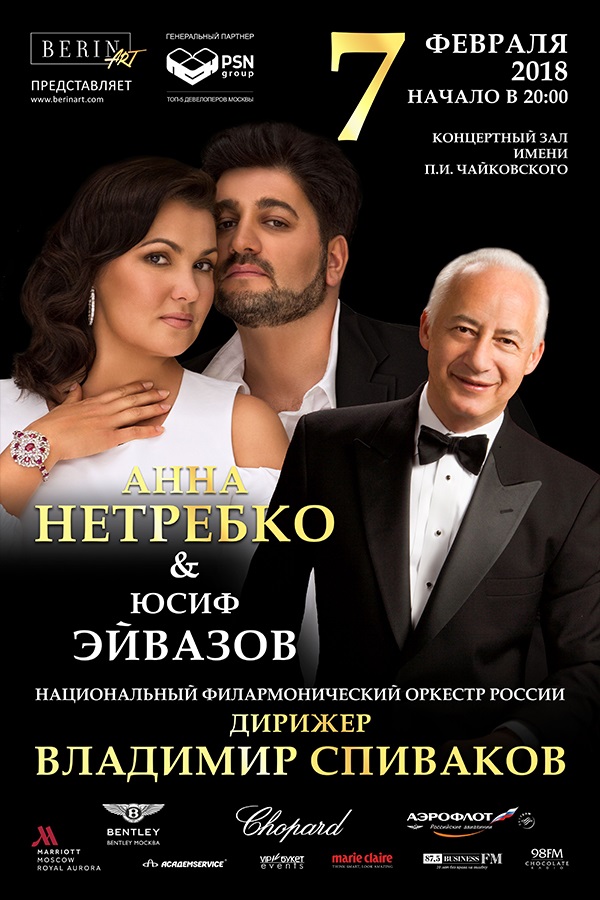 Anna Netrebko (soprano) and Yusif Eyvazov (tenor) will give only one concert in Moscow on February 7, 2018. It will take place at the Tchaikovsky Concert Hall and will be accompanied by the National Philharmonic Orchestra of Russia under the baton of Vladimir Spivakov.
Part 1 is completely devoted to the music by Giuseppe Verdi: fragments from such operas as “Attila”, “Otello”, “Macbeth”, “Il trovatore”, “I masnadieri”, “I vespri siciliani” and “Un ballo in maschera” will be performed. Part 2 includes fragments from operas by Italian verists (“I Pagliacci” by Leoncavallo, “Cavalleria rusticana” by Mascagni, “Andrea Chénier” by Giordano, “Manon Lescaut” by Puccini) and their antagonist Alfredo Catalani (“La Wally”) and also from Russian classics (Tchaikovsky's “The Queen of Spades” and Rimsky-Korsakov's “The Tsar's Bride”).

Anna Netrebko, a People's Artist of Russia and a winner of numerous awards, is a great opera diva and one of the most beloved singers of our time. She appears at all top opera venues in the world, from Milan's La Scala to the Metropolitan Opera. She easily shifts from a graceful coloratura to warm lyricism, from a gentle cantilena to dramatic bravura, and her ability for most amazing transformations is well known. Critics say that Anna's joint concerts with her husband, the gorgeous tenor Yusif Eyvazov, are especially poignant and inspired. The Grand-Prix holder of several international competitions in Italy and abroad, Yusif Eyvazov is in demand at the most famous opera houses, including the Bolshoi in Moscow, La Scala in Milan, the Opéra Monte Carlo and many others.

It is not the first meeting of Anna Netrebko, Vladimir Spivakov and the NPR on the same stage. In January 2011, the musicians took part in the 17th International Music Festival of the Canary Islands, held for more than a quarter of a century and featuring numerous world stars. The Concerts with the participation of the Russian artists became the main events of the 2011 Festival Edition and attracted a large audience. The cooperation found its continuation in a concert at the Moscow Performing Arts Centre in March 2012.

After the performance on February 7 in Moscow, Anna Netrebko, Yusif Eyvazov and Vladimir Spivakov will present the same program in Minsk (Belarus) on February 10.