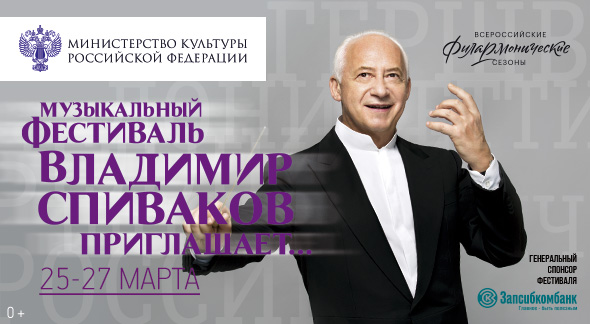 On March 25-27, 2018, the Tyumen Philharmonic Society will host the "Vladimir Spivakov invites ..." Music Festival. For three days Vladimir Spivakov, the National Philharmonic Orchestra of Russia and virtuoso soloists will perform on the stage of the Yu. Gulyaev Concert Hall.

The program for the Festival opening is titled "Belcanto Treasures and Rarities". The soloist will be Vasily Ladyuk, a star of the E.V. Kolobov “Novaya Opera” Moscow Theatre and a guest star of the Bolshoi, who will sing arias from operas by Rossini, Bellini, Donizetti and Verdi. In addition, the NPR musicians Kirill Soldatov (principal trumpet) and Andrei Mikhailovsky (principal clarinet) will show their art in the virtuosic concert variations on the themes of popular operas.

The soloist in the March 26 concert, fully devoted to the works by Dmitry Shostakovich, will be young talented pianist Timofey Vladimirov, the winner of the Vladimir Krainev International Pianist Competition in Moscow. “Timofey feels finely the music and, unlike many adults, succeeds in grasping the nuances of my interpretation of this Concerto,” – was Maestro Spivakov's appraisal of the young musician in 2017 after the joint performance when Timofey Vladimirov played the Second Piano Concerto by Dmitry Shostakovich. In Tyumen the First Piano Concerto of the composer will be performed.

The Festival final concert on March 27 will allow the audience to enjoy the mastery of Vadim Eilenkrig, a famous jazz trumpeter. He will take part in the performance of the “Postcards from New Orleans” Fantasy for trumpet and symphonic orchestra, written by Vadim Eilenkrig and Igor Kadomtsev on themes from the “Golden Age of Jazz”. The jazz potpourri will be preceded by “An American in Paris”, the well-known symphonic poem of George Gershwin. In the first part of the concert, Vladimir Spivakov will present two famous musical masterpieces based on Shakespeare's tragedy "Romeo and Juliet" - Tchaikovsky's Overture-Fantasy and the Fragments from Prokofiev's Ballet, both a kind of the Maestro's “visiting card”.

The Festival is held with the support of the Ministry of Culture of the Russian Federation in the framework of the “All-Russian Philharmonic Seasons” Project. This is a unique creative project that the Ministry of Culture and the Russian Philharmonic Society have been successfully carried out since 2003. The Project is aimed at reviving concert activities throughout Russia and ensuring an equal access to cultural values for inhabitants of various regions of our vast country.