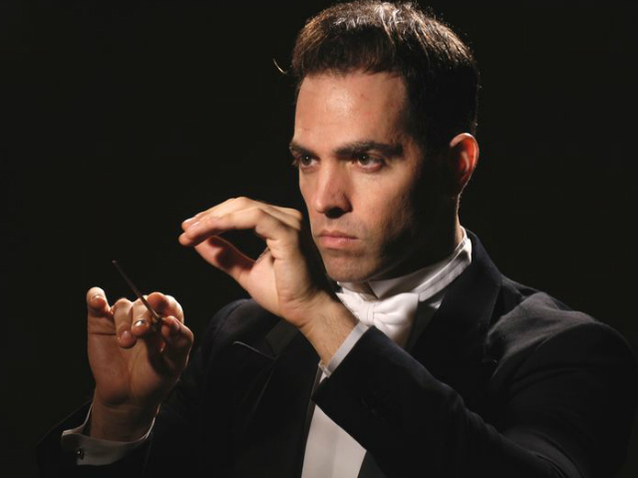 The next concert of the "Masterpieces for All Times" Subscription Series follows the line opened by the National Philharmonic Orchestra of Russia more than 10 years ago, when, on the initiative of Georgy Ageev, the NPR Director, an unprecedented group of conductors-interns was formed, thus starting an ambitious project named “The Conductors Elite. A New Generation”. The project, which aroused great interest in the musical community, attracted also young conductors from Europe. Since that time each year the NPR introduces new names to the general public and gives an opportunity to promising young maestros to reveal their talents.

In April, Israeli conductor Rani Calderon will make his debut with the Russian Collective. He was educated in Europe and Israel both as pianist (in the class of Alfred Cortot's famous pupil Pnina Salzman) and conductor. His first mentors were professors Shalom Ronli-Riklis and Mendi Rodan, who worked with the Israeli Philharmonic Orchestra and other ensembles. After meeting in Tel Aviv Bruno Rigacci, a conductor from Florence, who had been an assistant to Tullio Serafin in his youth, Calderon began to apprehend the methods of old Italian maestros and acquired a profound knowledge of the Italian operatic style. Such a thoughtful professional approach turned out to be very helpful for the young conductor.

By today he has successfully realized himself in both roles, i.e. as soloist and conductor, and besides, gained a solid experience in music theatres. A polyglot and an intellectual, he continued to master various performing traditions under the guidance of such coaches as Janine Reiss in Paris, Richard Trimborn in Munich, Tom Christoff in Dresden, which enabled him to interpret any music following its national style. Rani Calderón has worked with the Santiago Municipal Theater in Chile, then as the Musical Director and Principal Conductor of the Opéra National de Lorraine in Nancy (France) and with other leading European orchestras and opera houses.

Part I of the concert will also feature 10-year-old pianist Alexandra Dovgan, a pupil of the Central Music School at the Moscow Conservatory, an award-winner of international competitions, such as the Vladimir Krainev Moscow Piano Competition, where the young artist was awarded the NPR “Promise” Prize and a Special Prize from the Vladimir Spivakov Charity Foundation.