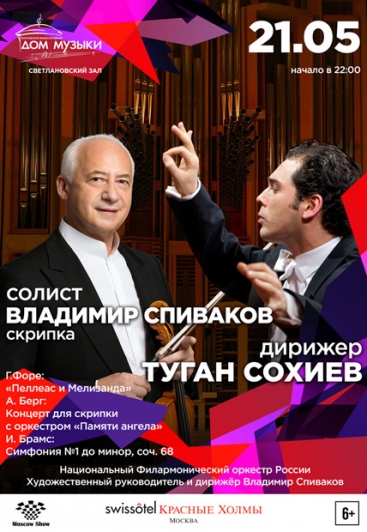 Vladimir Spivakov and the National Philharmonic Orchestra of Russia are closing the season with a special concert at the Moscow Performing Arts Center on May 21, 2018. On this night two masterpieces of Austro-German symphonic music will be presented at the Svetlanov Hall, namely, the Violin Concerto by Alban Berg and the First Symphony by Johannes Brahms. The solo part in the Concerto will be played by Vladimir Spivakov, who will gladden his admirers with the long-awaited violin performance in the symphonic genre, while Tugan Sokhiev, the Music Director and Principal Conductor of the Bolshoi Theater, will be on the NPR conductor podium.

Over the past decade, Vladimir Spivakov has concentrated his efforts primarily on conducting (as Head of the National Philharmonic Orchestra of Russia and the Moscow Virtuosi Chamber Orchestra), and chooses to play his splendid Stradivarius mainly in chamber ensembles. Vladimir Spivakov introduced Berg's famous Concerto, an opus “from the treasury of the world musical literature" (V. Spivakov) and one of the most expressive and complex works for violin, into his repertoire more than 20 years ago. The musician recorded it on a CD with the Gürzenich Orchestra Cologne under James Conlon, then performed it at the Colmar Festival (France) and at the closing of the Second “Vladimir Spivakov Invites ...” Festival in Moscow.

The press described Spivakov's interpretation as “a sharply intense experience”: “Following the soloist, the performance gradually acquired deep inner life, and the Finale of the Concerto was crowned with such a mystical shimmering chord which seemed to glow from inside, that one could not help getting icily chilled. It was worth playing the whole Concerto just for the sake of this wonderful chord. After that, I wanted to hear the Finale of the Concerto once again ...” . Composer Vladimir Tarnopolsky saw “the profound reading of the Violin Concerto by Vladimir Spivakov” as a step on the way to staging Berg's “Wozzeck” at the Bolshoi Theatre.

It seems symbolic that the current Music Director of the Bolshoi, Tugan Sokhiev, will partner Vladimir Spivakov and NPR on the stage. The world-famous conductor, he collaborates with top orchestras of the world, is a guest conductor of the Berliner Philharmoniker, the Wiener Philharmoniker, the London Symphony Orchestra, the Chief Conductor of the Orchestre National du Capitole de Toulouse. It is not Tugan Sokhiev's first encounter with the National Philharmonic Orchestra of Russia: a rewarding artistic relationship has been formed between the conductor and the collective for quite a time.

Berg's Violin Concerto, the composer's last completed work, is dedicated to the "memory of an angel" - the deceased 18-year-old daughter of Alma Mahler and Walter Gropius. The visionary structure of this work suggests a kind of a “double requiem” (the researchers think that the composer foresaw his own soon demise, which found its reflection in the music).

Brahms' First Symphony, on writing which the composer spent about 15 years, was inspired initially by Byron's Manfred. The structure of the Symphony follows the Beethoven traditions - an instrumental drama, whose movements are guided by one poetic idea. This allowed Hans von Bülow to call Brahms' First Symphony "Beethoven's Tenth Symphony".