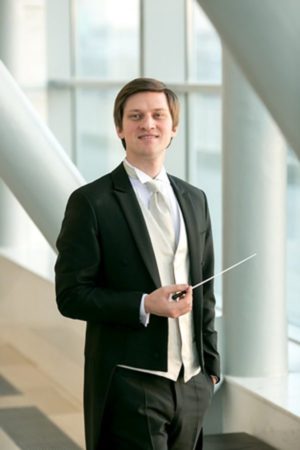 The young conductor Anton Torbeev, who first appeared with the National Philharmonic Orchestra of Russia on September 29 and 30, 2018, (he conducted the “Fairy Tales with Orchestra. Favourites” Concerts with Daniil Spivakovsky), has been accepted by the NPR Management as eligible to join the NPR Conductor-Trainee Group.

Anton Torbeev graduated from the N.A. Rimsky-Korsakov St. Petersburg State Conservatory (class of Professor Edvard Serov, 2012). He attended master classes of Lorin Maazel, Bernard Haitink and Fabio Luisi. In 2012–2013, he completed his internship course at the University of Music and Performing Arts in Graz (Austria), where he studied with Professor Wolfgang Dörner; participated in Peter Gulke's Workshop in Salzburg within the framework of the Mozarteum Summer Academy. In 2017, he participated in the MIN-ON International Conductor's Seminar in Seoul under the guidance of Professors Tadaaki Otaka and Chung Chi-yong. He won grants from the Gartow Stiftung (Germany) and the George Solti Foundation (Belgium). In 2018, he was awarded the Audience Award at the First International Conducting Competition in Hong Kong.