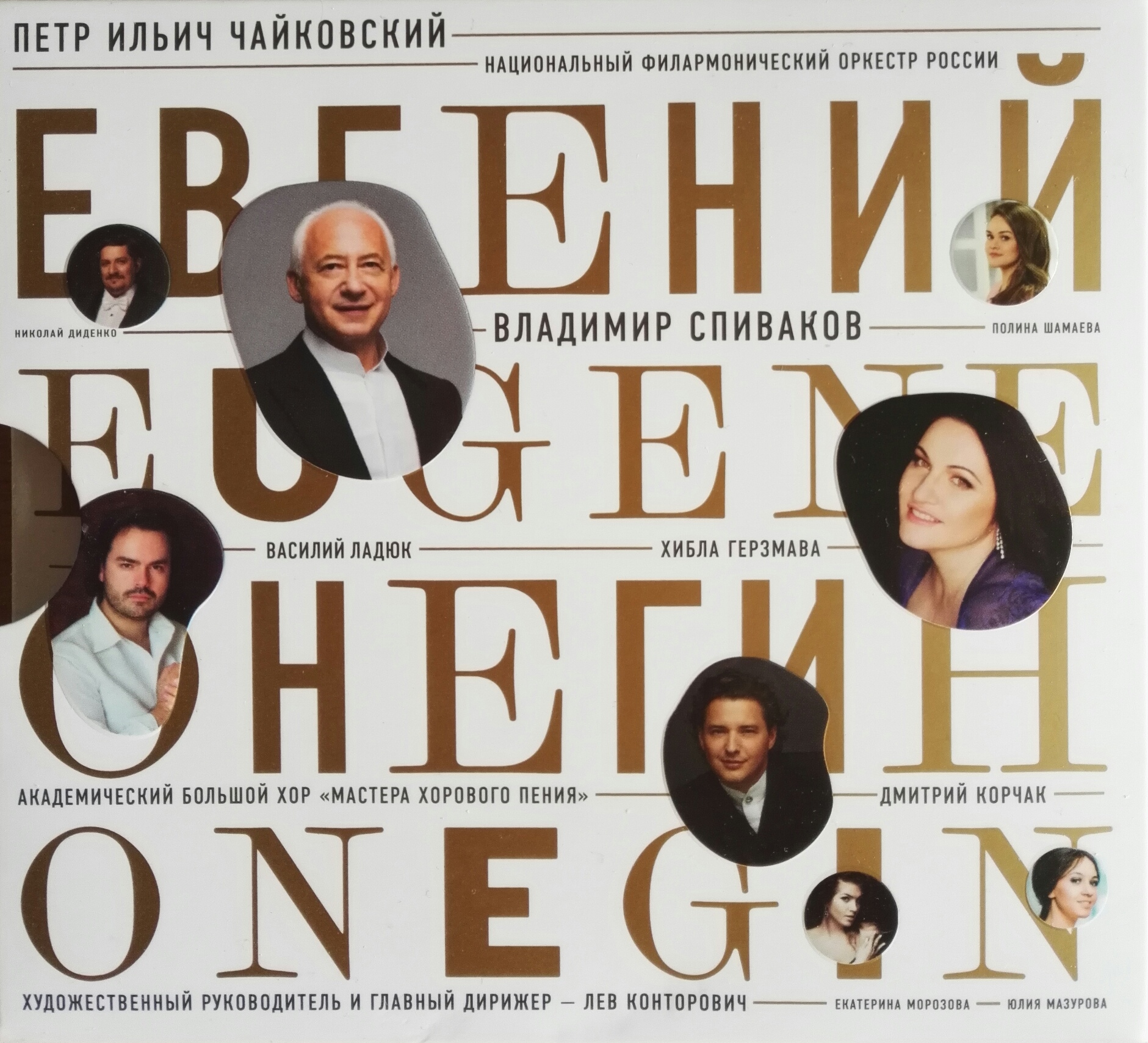 The National Philharmonic Orchestra of Russia under the baton of Vladimir Spivakov has released a recording of P.I.Tchaikovsky’s opera Eugene Onegin under the ‘Spivakov Sound’ label.

“The lyricism of lyricisms”, that’s how Boris Asafiev, a renowned composer and musicologist, called Tchaikovsky’s Eugene Onegin, whereas an aficionado of the genre could say “The opera of operas”. The opera was written in the Romantic 19th century, the apogee of emotion and lyricism in the arts. The Romanticism ideas with their exploration of human feelings were central to Tchaikovsky. He wrote to Taneyev “I am looking for an intimate but powerful drama, based on the conflict of circumstances, such as I myself have experienced or witnessed, and which could move me to the core”. Almost by accident he found just what he needed in Pushkin's masterpiece.

The novel itself holds a highly prominent place in Russian literature. It is a verse novel, a relatively rare structure now, but well known in world literature since the ancient times and modernized in the 19th century. Being a classic of poetry, Pushkin's Eugene Onegin nonetheless bears strong realistic traits. Critic Vissarion Belinsky even typified it as “an encyclopedia of Russian life”. Tchaikovsky's opera, defined as lyrical scenes, combines the poetry of the original with the most inspired musical imagination.

Vladimir Spivakov heard this opera for the first time at the age of 12, at the Opera Studio of the Leningrad Conservatory, and the impression has stayed with him forever.

For this recording Spivakov assembled artists who had shared the stage with him on many occasions. Hibla Gerzmava, with her rich and agile soprano, has a wide operatic repertoire, and excels also in Russian classical songs and ‘popular’ music. Baritone Vasily Ladyuk feels himself at home both in comic and dramatic roles. All in all his repertoire includes over 30 operas, cantatas and oratorios. Dmitry Korchak has embellished with his lyrical tenor many opera houses worldwide, acclaimed everywhere as one of the finest bel canto voices. The other singers fit their roles perfectly as well: Nikolay Didenko (bass), Polina Shamaeva (mezzo), Ekaterina Morozova (soprano), Maksim Ostroukhov (tenor), Valery Gilmanov (bass).

Spivakov’s rendering of the opera impresses with its integrity and truthfulness to Tchaikovsky’s original intentions, unlike many other nowadays productions. His approach is fresh and devoid of hackneyed clichés, thus demanding attention and involvement which come to a listener almost from the first bars. This Onegin recording, while following the score accurately, without altering a single note, is most personal and modern, rich in nuances and colours.

An interesting novelty is to assign young voices to the older characters which is fully justified as in the 19th century 40 years were considered an advanced age. Shamaeva (the Nurse) and Morozova (Lady of the Manor) were encouraged to employ opulent and sonorous voices for their parts, adding vividness to the music. Spivakov also asked Didenko to sing Prince Gremin with more vitality and expression which corresponds to his military rank.

Spivakov uses the choir quite fascinatingly as an ancient Greek chorus commenting on the action. The renowned choral ensemble “Masters of Choral Singing” under the direction of Lev Kontorovich, consisted of professional singers of great quality, is exemplary in this function.

Let us move on to the main characters.
Tatyana Larina, sung by Hibla Gerzmava, is presented with her many facets: consumed with feelings, romantic, anguished, embarrassed, serious, well-read, sincere, brave (the Letter Scene). Later proud, faithful to her familial duty, yet not denying her everlasting love (the Final Scene). Gerzmava manages to convey the whole gamut of emotions of the main character with unprecedented credibility, magnificently demonstrating the genius of Tchaikovsky’s music .

The role of Eugene Onegin, a young nobleman from Saint-Petersburg, is entrusted to Vasily Ladyuk. His first appearance in the opera (together with Lensky) is finely punctuated by the orchestra: courtesy, politeness, civility. This style is maintained in the Aria when Onegin is responding to Tatyana’s letter. Onegin’s respectful yet condescending tone is an outstanding example of the falsely noble character in music.

And the way Spivakov leads the Enemies! Duet of Lensky and Onegin (Korchak and Ladyuk) in Act 2? The even, polyphonic canon does not show a glimpse of hope. The Duet emerges as a clear foreshadowing of the unavoidable tragedy.

The opera evolves into tragedy. The most dramatically impressive episode for Onegin, of course, is the Final Scene. With the words “To see you hourly, to dog your footsteps,” Ladyuk powerfully conveys the undeniable sincerity of Onegin’s anxiety. But the tragic stroke of fate reaches its peak in the three final cries: “Ignominy!.. Anguish!.. Oh, my pitiable fate!” With Spivakov’s treatment, the three lines sound different from each other, aggravating the tension up to the fatal end.

Lensky and Olga: an 18 year old poet and his sweetheart he cannot live a day without. It is Lensky who sings the famous Arioso with declarations of love. This part is entrusted to Dmitry Korchak, who has participated in many programmes with Spivakov. The secret of the solo in this interpretation is the intense importance of each tone. The conductor subtly underlines the text-melody interplay. It is his characteristic approach. For example, when he added fine nuances to the musical phrasing of the text in Rachmaninoff’s All-Night Vigil, the words acquired the utmost depth together with the melody.
The conductor also added new shades to the understanding of Olga’s character (Yulia Mazurova). Traditionally she is considered a light-minded and careless young girl, but in this rendition she is more serious. Thus, in the Quarrel Scene during Tatyana’s name day, she even displays a dramatic character of substance: “I fear that after all our revelry, the night may end with a duel!”

The treatment of the purely orchestral episodes, the Dance Suites in particular, is remarkable in the dramatic composition of the opera. According to the plot, they rush into the action twice: in Act 2 during the ball at the Larins (Waltz, Mazurka) and in Act 3 during the ball in Saint-Petersburg (Polonaise, two Ecossaises). Alternating with sublime lyrical moments, without ruining them, they bring force and energy to the opera as a whole, hinting at a more contemporary trend of human emotions. For greater expressivity of the orchestral episodes Spivakov marked his own fingerings and bowings in the score.
However, the orchestra also provides a counterpoint in the dramatic composition of the opera: it depicts the tragic side of the story.

Even at the very beginning of the Introduction, the main theme is performed by the conductor with an unhurried weight. In Scene 2 of Act 1, despite its being far from the ending of the opera, the music is filled with desperate sighs, which gives a distinct intimation of the impending tragic turn. At the beginning of the Introduction in Scene 2 of Act 2, before the duel, the orchestra’s stentorian brass winds and mournful rhythm sound funeral.

Finally, the last page of the opera: after the definitively doomed three utterances of the cast-off lover, the orchestra gushes a rapid stream of chords at fff , as if sealing Eugene Onegin’s fate. Thus, by virtue of the tragic line in this interpretation, Tchaikovsky’s music, full of enchanting lyricism, becomes a profoundly dramatic work – Tchaikovsky truly found his “intimate but powerful drama”.

Unlike the commonplace distortions of operas nowadays, the rendition of Tchaikovsky’s Eugene Onegin by Vladimir Spivakov and his artistic associates feels like ‘cleaning an icon’ undertaken by a modern master. This aspect of the production is fittingly expressed by Pushkin himself in his poem Resurrection:
The work of genius is 'gain before us,
With former beauty out it comes.