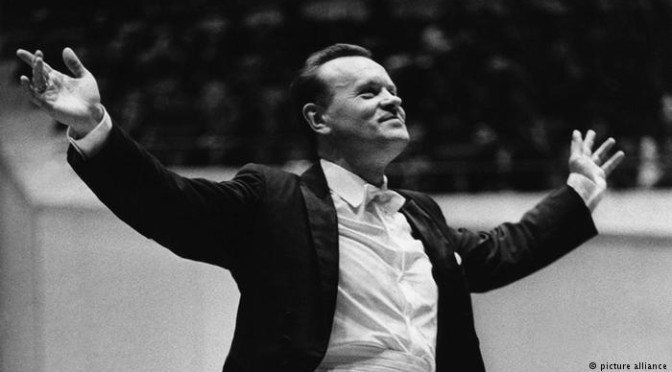 September 6, 2018 was the 90th birth anniversary of Evgeny Svetlanov, the great Russian conductor, pianist, composer and writer. Vladimir Spivakov and the National Philharmonic Orchestra of Russia dedicate the musical night on December 22 at the Tchaikovsky Concert Hall to this date.

Musical offerings to great masters of the past, who developed and influenced our country's culture, have become the NPR's good tradition since its very first season. But in the glorious row of names, that of Evgeny Svetlanov's has always stood alone. The NPR's first performance took place on September 27, 2003 in the Great Hall of the Moscow Performing Arts Centre, and on that evening Vladimir Spivakov announced that the new hall had been called the Svetlanov Hall on his own initiative. The orchestra follows the traditions established by Svetlanov and regards his creative legacy as one of its most important artistic landmarks. In 2014, Vladimir Spivakov dedicated the International Festival in Colmar to Evgeny Svetlanov.

Cellist Alexander Ramm, the permanent artistic partner of Vladimir Spivakov and his collectives, will take part in the concert. A student of Natalia Shakhovskaya and Frans Helmerson, Alexander Ramm has grown into a mature, experienced musician and earned the love of audiences in his country and abroad. He has won awards at competitions in South Africa (UNISA), Beijing, Helsinki, and became the winner of the First All-Russian Music Competition in Moscow. The Jury of the XV Tchaikovsky International Competition. (2015) rewarded the musician with a prize and a silver medal. A member of the Jury, famous cellist Misha Maisky, called Alexander “a terrific performer with a great future.”

The concert features works that embellished Evgeny Svetlanov’s repertoire — masterpieces by Tchaikovsky, Lyadov and Scriabin.
Vladimir Spivakov: 'Svetlanov was an incomparable interpreter of Russian classics. He is one of those great artists who, during their lifetime, raise to themselves intangible monuments like the one Pushkin wrote about in his famous poem. Svetlanov's discography, his “Anthology of Russian Symphonic Music” is a phenomenon in the modern history and practice of musical performance, this is the feat of an artist, equal to which I cannot find. Svetlanov's recordings are more like conversations with future audiences, with our descendants.
Svetlanov expanded the space of music, especially that of Russian. His performing style was very personal. He seemed to be transferring “the breath of the Russian soul” to music: this is felt in his phrasing, approaches to climaxes, highlighting certain tones. He gave useful advice, shared the secrets of mastery, and one of his most valuable precepts is to conceive and apprehend the entire shape of a musical work, just as a mother perceives her baby before its birth. Svetlanov was able to squeeze everything out of the orchestra. He put all his inner power, all his passion and temperament into music.'