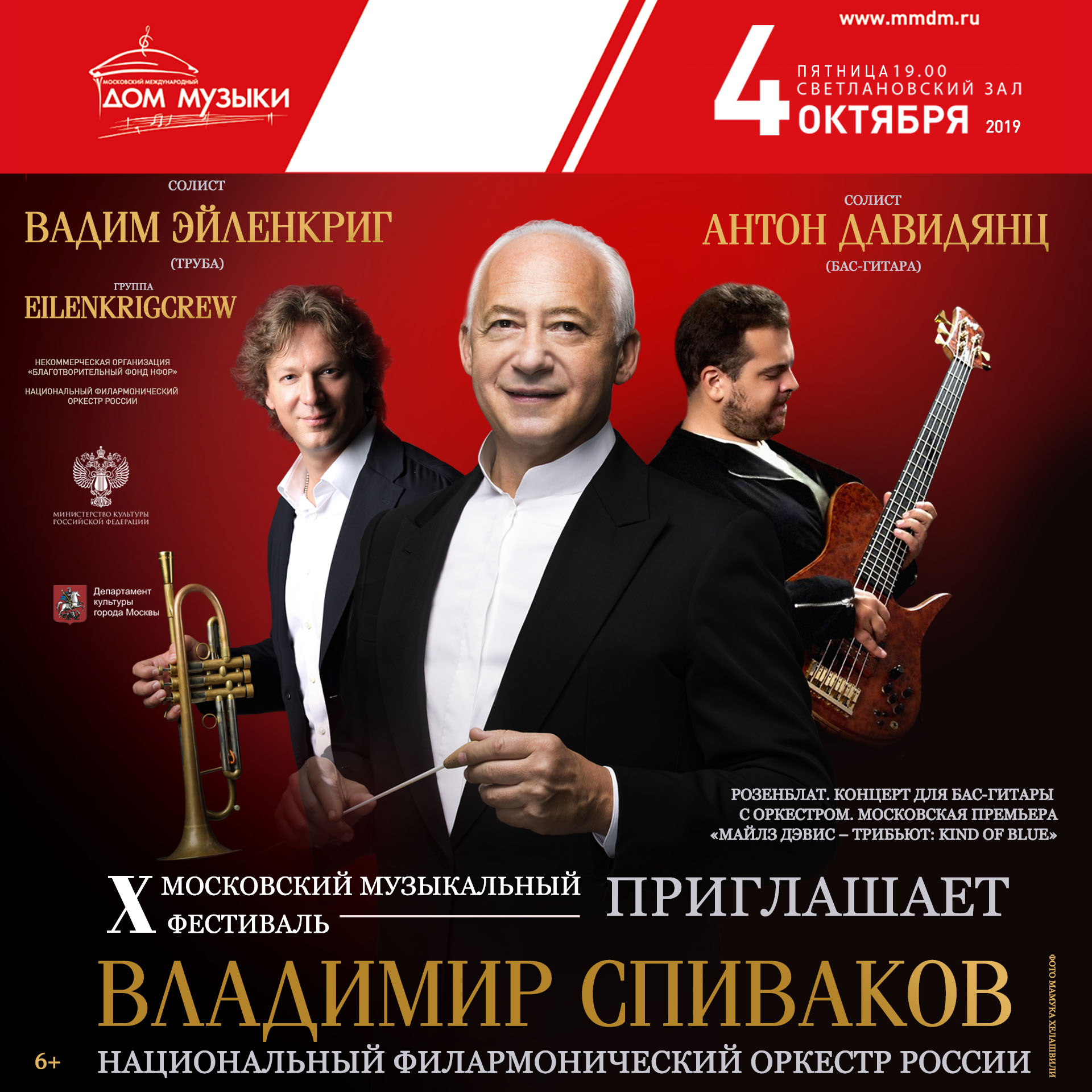 Over the years of its existence the Moscow Festival “Vladimir Spivakov Invites” has earned the reputation of a multi-genre project where everything is admissible provided the artistic level is of high order. The Festival has hosted jazz masters more than once, and Vladimir Spivakov always displayed openness to a wide variety of musical styles and genres. He is again ready to confirm this approach by writing a new “non-classical” page with two premieres into the Festival's history.

The main premiere of the evening is the large-scale joint project by Vadim Eilenkrig and the National Philharmonic Orchestra of Russia titled “Symphonic Kind Of Blue. To the 60th Anniversary of Miles Davis's Great Album”. In this program, the legendary jazz masterpieces will take on a symphonic form. Vladimir Spivakov himself will be on the conductor podium. The best-sold jazz album in the recording history, the work that opened the door to a new musical era, the “Bible” of every jazz musician, - all this is Miles Davis’s Kind of Blue. “I tried to think through everything to the tiniest detail: from general dramaturgy to climaxes, - says Vadim Eilenkrig. - After all, Kind Of Blue is chamber music, for a very personal perception. And now it was reworked to acquire the features of a Concerto, preserving at the same time the spirit of the Album! Miles is an iconic musician, a guidance in elaborating a new style, a new sound. He would use in his projects all musical innovations that appeared in the twentieth century, brought his own vision into them. I set to myself the task of telling my story with his language.”

The Concerto for Bass Guitar and Orchestra by Alexander Rosenblatt will open the night. The world premiere of the unusual work took place in September 2017 at the SymphoRockPark Festival in Omsk, where Anton Davidyants, for whom the Concerto was written, played the solo part. Now, Rosenblatt’s masterpiece will be presented to the Moscow audience. “To be performed by such Orchestra with the Maestro on the podium is worth a lot! - says the composer. - And it is also wonderful to work with the bass monster Anton Davidyants! Friendship with him is a great joy, and I am grateful to the fate for giving me the opportunity.” Anton Davidyants has got various awards, had joint projects with world celebrities, and his virtuosity is admired not only by colleagues. For very good reason he is considered to be the best jazz and rock bass player in modern Russia.