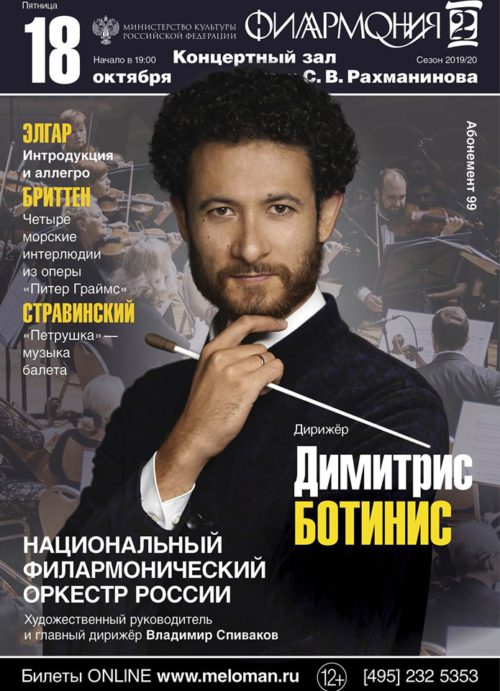 The 2019 year has been chosen as the Year of the music of the United Kingdom and Russia. The program of the Year of Music acknowledges the opulent cultural heritage and musical traditions of Great Britain and Russia and is meant to strengthen the ties between the peoples of the two countries. Greeting this far-reaching cultural project, the National Philharmonic Orchestra of Russia offers a special concert program featuring works of Russian and English classical music.

The masterpieces by Edward Elgar, Benjamin Britten and Igor Stravinsky will be presented by Dimitris Botinis, the NPR's permanent artistic partner, assistant conductor of the Academic Symphony Orchestra of the Moscow Philharmonic Society and art director of the Academic Symphony Orchestra of the North Caucasus. Earlier Botinis won the Antonio Pedrotti International Conducting Competition, receiving also all specail awards (Italy, 2006), and the 1st All-Russian Music Competition in the nomination “opera-symphonic conducting” (Moscow, 2011).

The name of Edward Elgar is mostly associated with the so-called “English Renaissance” at the turn of the 19th-20th centuries, the movement aimed to  revive national musical traditions. Elgar's music represents the golden age of Romanticism for the British. Elgar wrote the Introduction and Allegro for string quartet and orchestra for the London Symphony Orchestra, trying to synthesize the harmony and proportionality of the classic form with romantic expression by incorporating into the score an authentic Welsh folk melody recorded by him at a folk festival in Cardiganshire (West Wales).

The Four Sea Interludes from the opera Peter Grimes is one of the most popular works by Benjamin Britten, the greatest English composer of the twentieth century. The composer wrote his opera about fisherman Peter Grimes on commission from the American conductor Serge Koussevitzky, and this work marked the beginning of a new era in the English lyric theatre. The 32-year-old author revealed himself not only as an outstanding musician who spoke an original language and finely felt the specifics of orchestration, but also as a gifted playwright and subtle psychologist. Four orchestral fragments from the opera (Dawn, Sunday Morning, Moonlight, Storm) were later rewritten by Britten as an independent work.

Igor Stravinsky’s ballet Petrushka, staged in 1911, became one of the most brilliant projects of Diaghilev's Ballets Russes: the seminal performance made the French, and then the European audience, take a fresh look at the Russian art. The reckless feast of the Russian crowd was shown by Stravinsky in all the variety of themes, with detailed portrayals of the characters, using not only Russian folk songs, but also urban melodies, all wittily orchestrated,  in bizarre rhythms and avant-garde harmonies. According to Alexander Benoit, the scenography in the World of Art aesthetics  became the best work in the theater, while  the choreography by Mikhail Fokin and the image of Petrushka created by Vaslav Nijinsky (Wacław Niżyński) went down into the world ballet history as the highest achievements of dance art of the 20th century. The NPR will play the ballet music as edited in 1947.