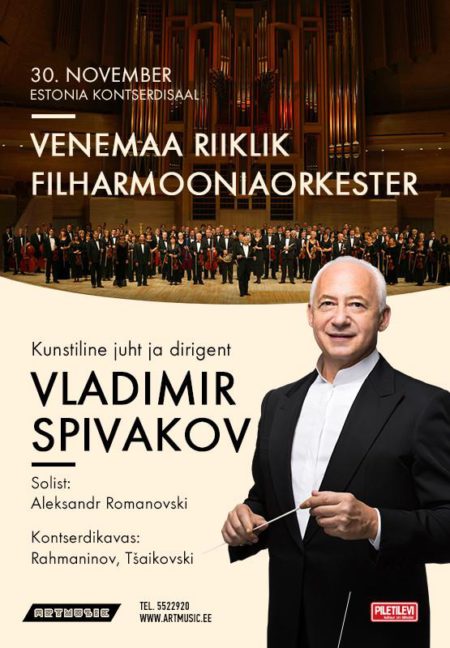 Vladimir Spivakov and the National Philharmonic Orchestra of Russia will give three concerts in the capitals of the Baltic Countries. The performances of the Russian collective will start on November 30 in Tallinn in the famous hall of the “Estonia” National Opera, go on at the Latvian National Opera in Riga, also a venue of a glorious and long history, on December 2, and end on December 3 at the new Compensa Concert Hall, opened in 2014, in Vilnius. The program of all three musical nights will feature Rachmaninoff's Third Piano Concerto and Tchaikovsky's Fifth Symphony.

The pianist Alexander Romanovsky, titled a honorary academician of the Accademia Filarmonica di Bologna when he was only 15-year old, winner of international competitions in Bolzano and Cantu, award-winner of the Tchaikovsky Competition, art director of the Vladimir Krainev Moscow International Piano Competition, will take part in the NPR concerts. The musician lives in Italy and appears regularly at the most prestigious concert venues worldwide. The New York Times praises his wonderful mastership of playing, artistic personality and noble taste, and The Guardian calls him “the true champion of the traditions of the great Russian piano school.” Vladimir Spivakov also enthusiastically speaks of his partner whom he knows since Alexander was a little boy: “According to conductor Carlo Maria Giulini, with whom I fully agree, there has never been such a pianist after Michelangeli and Pollini in Italy.”

The National Philharmonic Orchestra of Russia is touring the Baltic Countries for the third time. The first tour took place in October 2006 with mezzo-soprano Tatyana Pavlovskaya as the soloist in the concerts which included masterpieces by Richard Strauss, Tchaikovsky, Prokofiev, Bizet, Puccini, Dvořák , Rossini, Cilèa. The NPR's next concerts with pianists Philip Kopachevsky and Alexander Romanovsky, featuring Rachmaninoff's works, were held in Tallinn, Riga and Vilnius in June 2011. The NPR tours have invariably turned into a great occasion in the Baltic states, hence it is expected that in 2019 all the concerts will be sold out.