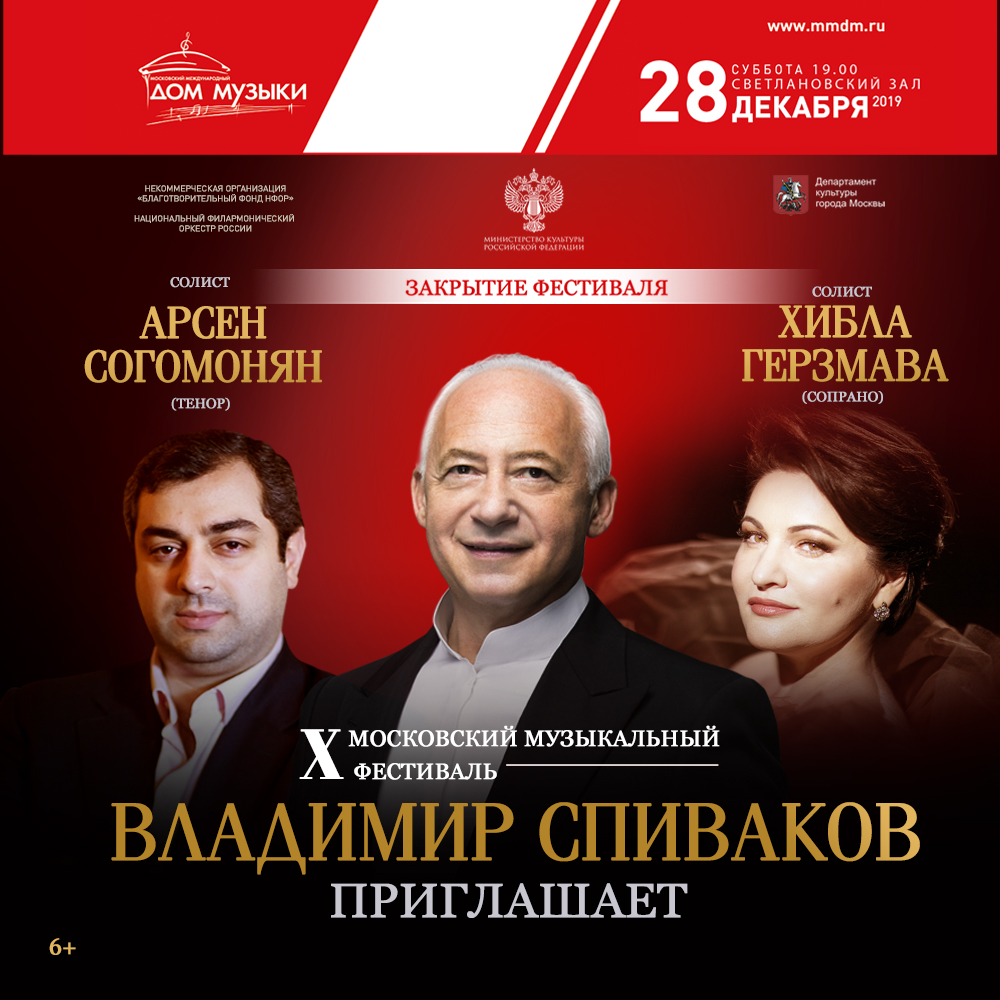 Closing Vladimir Spivakov's Festival with a New Year's Eve opera gala  has turned out to be a good tradition. The maestro invariably invites top stars with whom joint performances are always the source of artistic satisfaction and great joy. Hibla Gerzmava, the diva of the Russian opera stage, and the charismatic tenor Arsen Soghomonyan will embellish the Festival's finale. The concert will feature arias, duets and orchestral fragments from operas by Giuseppe Verdi and Verismo composers.

The creative alliance of Vladimir Spivakov and Hibla Gerzmava got formed many years ago. She regularly takes part in the maestro's programs; he is a welcome guest at her festival. She owns a unique voice, a phenomenal artistic personality and high musical culture. Her name is a guarantee of a sold-out house in any country worldwide. One of the best Bel canto performers, who in recent years has extended her repertoire singing parts for dramatic soprano, Hibla Gerzmava was twice awarded the Golden Mask Theater Prize. The singer has been applauded at London's Covent Garden, the Metropolitan Opera in New York, the Vienna Opera, she shines in the most difficult roles and is crowned with the most honorable awards, including the Grand Prix of the Tchaikovsky International Competition. “I am so proud of my friendship with Vladimir Spivakov. Every meeting with him is happiness. I am grateful to fate for being able to perform with him on the same stage and sing for him,” - says the singer.

This is not for the first time that Arsen Soghomonyan becomes Hibla Gerzmava's stage partner, and his strong and beautiful dramatic tenor is great for expressive Italian duets. Until 2017, Arsen Soghomonyan had sung principal baritone parts at the  Stanislavsky and Nemirovich-Danchenko Musical Theater, where he made his debut as a tenor in the role of Cavaradossi (“Tosca” by Puccini). He then sang Canio (Leoncavallo's “I Pagliacci”) in Mexico and steadfastly took on other major tenor parts. The singer’s outstanding acting talent allows him to embody tragic, lyrical, dramatic and comic roles convincingly and vividly (one of his best baritone parts was Figaro). The singer’s nearest engagements include performances in famous European theaters, such as the Frankfurt Opera, the Teatro Regio in Turin and the Royal Opera Covent Garden in London.