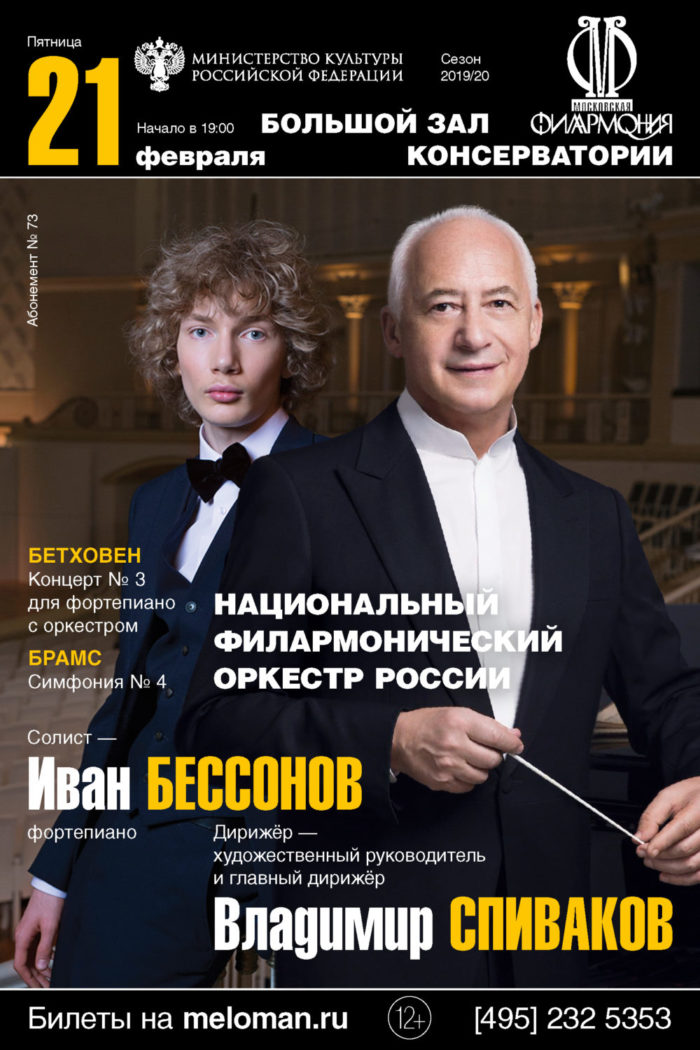 The concert of the National Philharmonic Orchestra of Russia on February 21 in the Great Hall of the Moscow Conservatory is part of the  Philharmonic Subscription Series No. 73 (“Musical Summits”). Under the baton of Vladimir Spivakov there will be performed such celebrated masterpieces of German classics  as Beethoven's Third Piano Concerto and Brahms' Fourth Symphony.

The pianist in  Beethoven's Concerto will be young Ivan Bessonov, a permanent artistic partner of Vladimir Spivakov and his collective. The 17-year-old musician is currently completing his studies at the Central Music School at the Moscow Conservatory (class of Vadim Rudenko), but has already got prizes and awards at many important international competitions, among which there are the Astana Piano Passion in Kazakhstan, Grand Piano Competition in Moscow and Eurovision Young Musicians in Edinburgh. Ivan Bessonov took part in the NPR's large European tour in the autumn of 2018, then played with the Orchestra in Madrid, Tashkent, Orenburg, Ufa, Tyumen, Murmansk, St. Petersburg. In 2019, he was awarded the BraVo International Music Award in the Discovery of the Year nomination.

Concerto No. 3 for piano and orchestra in C minor is one of the apexes in Beethoven's heritage, being a full-fledged drama in instrumental music. Instead of an abstracted contest between the pianist and  the orchestra, the composer depicted the opposition of the hero against the Doom, or Fatum, - the same fate that so clearly “knocks at the door” in his glorious Fifth Symphony. The dramatic model invented by Beethoven (the initial conflict dissolves in the final dance)  later was  followed by Schumann, Grieg, Brahms, Tchaikovsky, Dvořák, Sibelius and many others.

Brahms also brought a valuable contribution into the evolution of one of the most important instrumental genres, completing his last, Fourth Symphony in E Minor in the autumn of 1885. Its fully personal dramatism, which has no analogies in the history of music, its inner life, growing, as I. I. Sollertinsky put it, “from elegy to tragedy”, immediately found response in the hearts of the audience. The work remains one of the most popular symphonies for both listeners and musicians - thanks to its unusual contrasts, refined forms and inspired melodies.