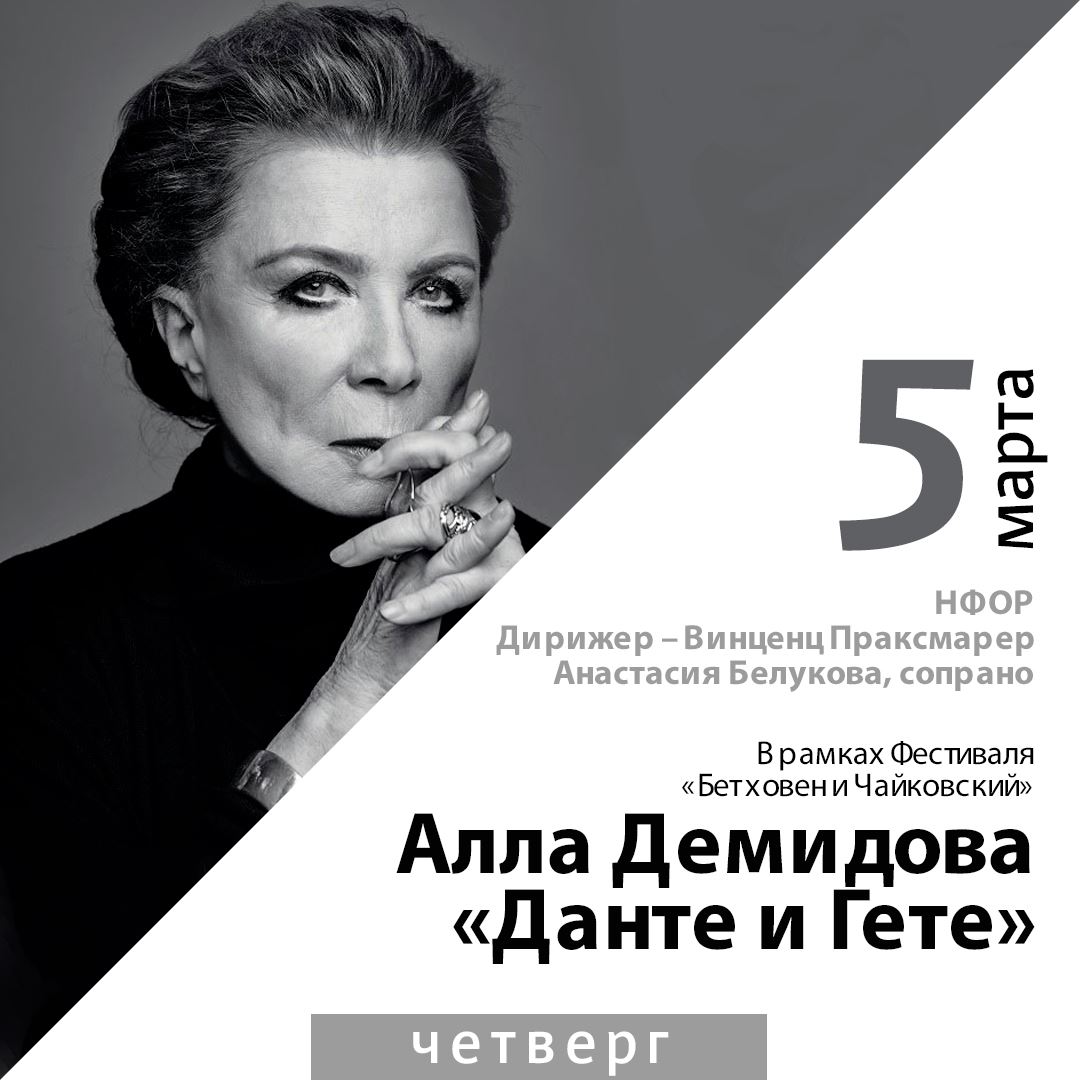 The concert of the National Philharmonic Orchestra of Russia on March 5 will be part of the Beethoven and Tchaikovsky Festival organized by the Zaryadye Moscow Concert Hall to commemorate the anniversaries of the great classics. In 2020, the music world celebrates  Ludwig van Beethoven's 250th birth anniversary and Pyotr Ilyich Tchaikovsky's 180th birth anniversary, and the NPR participates in various projects related to these significant dates. Alla Demidova, the eminent theatre and cinema actress, spoken word artist, People’s Artist of Russia, and Anastasia Belukova (soprano), a soloist of the  Kolobov Novaya Opera Theatre, prize-winner of the Triumph Youth Award,  will join the orchestra on the stage.

The Beethoven and Tchaikovsky Festival presents the music of the two giants in all its diversity, but only one program is devoted to the synthesis of music and poetry, music and drama, which produced such masterpieces as the Francesca da Rimini Symphonic Fantasy by Tchaikovsky. The proper reason for its creation was the composer’s reading of Canto V of  Inferno from Dante’s Divina Commedia (the Divine Comedy). Tchaikovsky was much impressed not only by the poetry, but also by Gustave Doré's illustrations. To the musical score of the Fantasy Tchaikovsky added his own text with details of the tragic love story of Francesca and Paolo. The images of Dante's homeland also served as the basis for his Capriccio Italiano, the brilliant orchestral opus.

Beethoven’s set of incidental music to Goethe’s tragedy “Egmont” is today referred to as the “musical-historical phantom”. Indeed, the whole score, written in 1809 on commission from the Vienna Burgtheater, is very seldom performed. Only the Overture, which has gained immense popularity, is the staple of concert programs, but on March 5, the audience will have a rare opportunity to hear the whole set. During the Napoleonic Wars, Goethe's tragedy was perceived as a vital play claiming for national liberation, and Beethoven shared the spirit of both the playwright and the society. The composer declined the fee in order to emphasize writing his Egmont “only out of love for the poet”. Moreover, the portrayal of the hero, a fighter for freedom and independence, was close to him like no other.

The NPR will be directed by the Austrian conductor Vinzenz Praxmarer, a graduate from the Vienna University of Music and Performing Arts. He worked as an assistant to well-known  conductors (such as Franz Welser-Möst, Kirill Petrenko, Philip Jordan, Yannick Nézet-Séguin, Christoph Eschenbach, Bertrand de Billy), during the past seasons he successfully debuted at the Salzburg Festival and a number of other important European events, conducted at the Volksoper Vienna, Theater an der Wien, Vienna State Opera, Paris National Opera, National Opera of the Netherlands, Bern Theater and others; collaborated with the Munich Radio Symphony Orchestra, Latvian National Symphony Orchestra, Tchaikovsky Symphony Orchestra, Moscow State Symphony Orchestra, Musikkollegium Winterthur Orchester, Vienna Tonkünstler Orchestra and other collectives. The maestro heads the Divertimento Viennese Chamber Orchestra founded in 1998 in Vienna. It is his debut with the NPR.