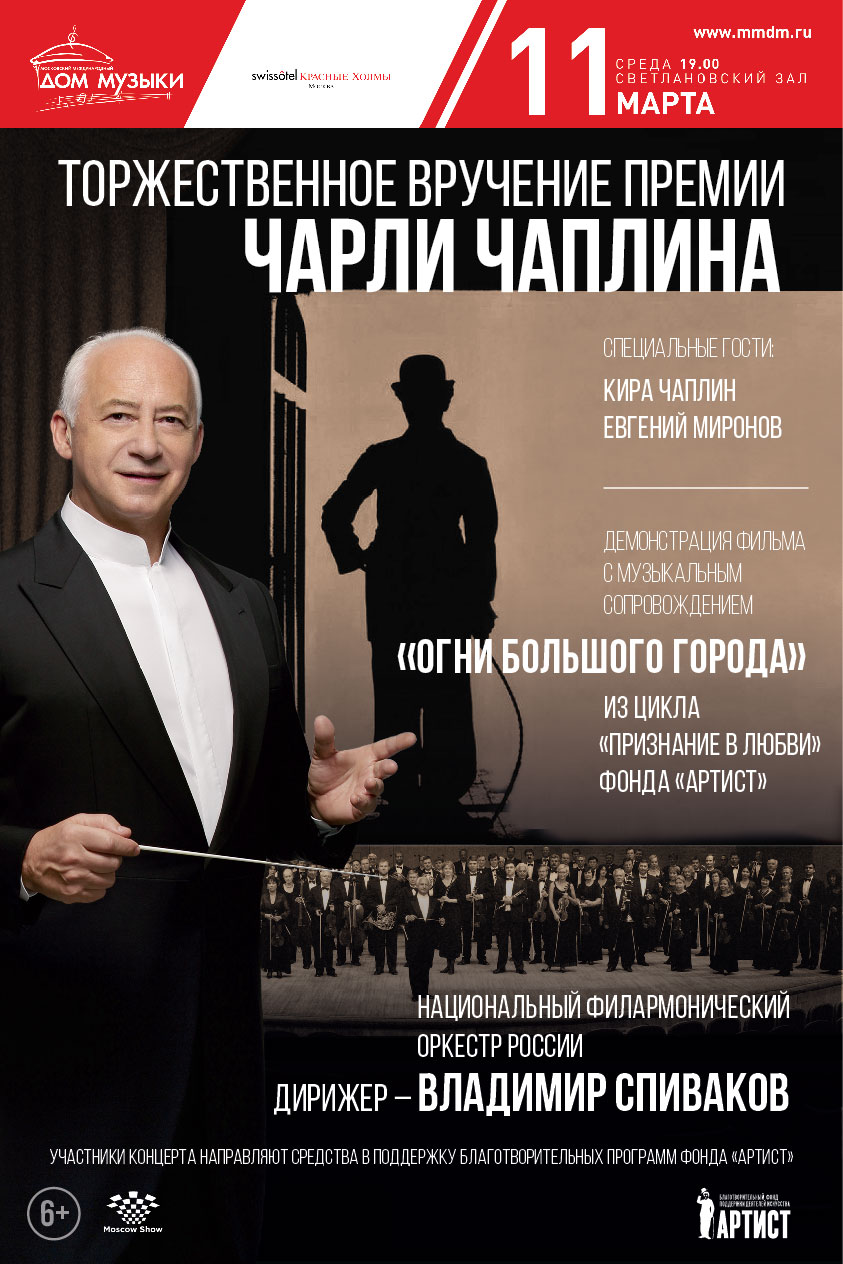 On March 11, the National Philharmonic Orchestra of Russia will again take part in the charity concert of the "Artist" Foundation, whose goal is to raise funds to help veteran artists by providing them with medicines, sanatorium treatment and rehabilitation, patronage and home care. The night will also include the award ceremony of the Charlie Chaplin Prize for outstanding contribution to arts. Every year since 1972, the Chaplin Prize has been bestowed to the most famous figures in the film industry, such as Alfred Hitchcock, Lawrence Olivier, Federico Fellini, Elizabeth Taylor, Martin Scorsese, Barbra Streisand and others. The new prize winner will be announced at the Svetlanov Hall of the House of Music, and the award will be  presented by Chaplin's granddaughter Kiera Chaplin.

On this night "City Lights", Chaplin's most sublime film of the “silent” era,  will be shown on the big screen. It was shot in 1931, when film studios already had released first sound pictures. The hero of the film was again the Little Tramp invented by Chaplin and the world's most known and beloved screen character by that time. In this film Chaplin traditionally undertook several parts, those of screenwriter, director, main actor, producer, choreographer and, for the first time, that of composer. Chaplin commended the orchestration and arrangement of the music to professionals – Arthur Johnston and Alfred Newman, whom he held in high esteem.

In 2004 American conductor Timothy Brock reconstructed the "City Lights” score, and five years later Vladimir Spivakov paid attention to it. He included the showing of the immortal picture with live music into the Fifth Edition of the "Vladimir Spivakov invites ..." Moscow Festival, and the project was great success. Subsequently, the Maestro and the NPR presented it in many cities in Russia and abroad.
The Chaplin Programs were among the most rewarding discoveries of Vladimir Spivakov and the NPR.

Film screenings of Chaplin's immortal movies with live orchestral accompaniment have united audiences of all age categories and social groups in joined spontaneous empathy. "Chaplin is a great poet who got deeply inside the human nature," says Vladimir Spivakov. – He appeals to the best sides of our heart. He understands well that we are all on the edge of an abyss and that human life is but a fleeting memory of a day spent at a party. Chaplin showed us the fragility of human life ... He showed us that we should believe and hope, and that a true feeling would defeat many obstacles."