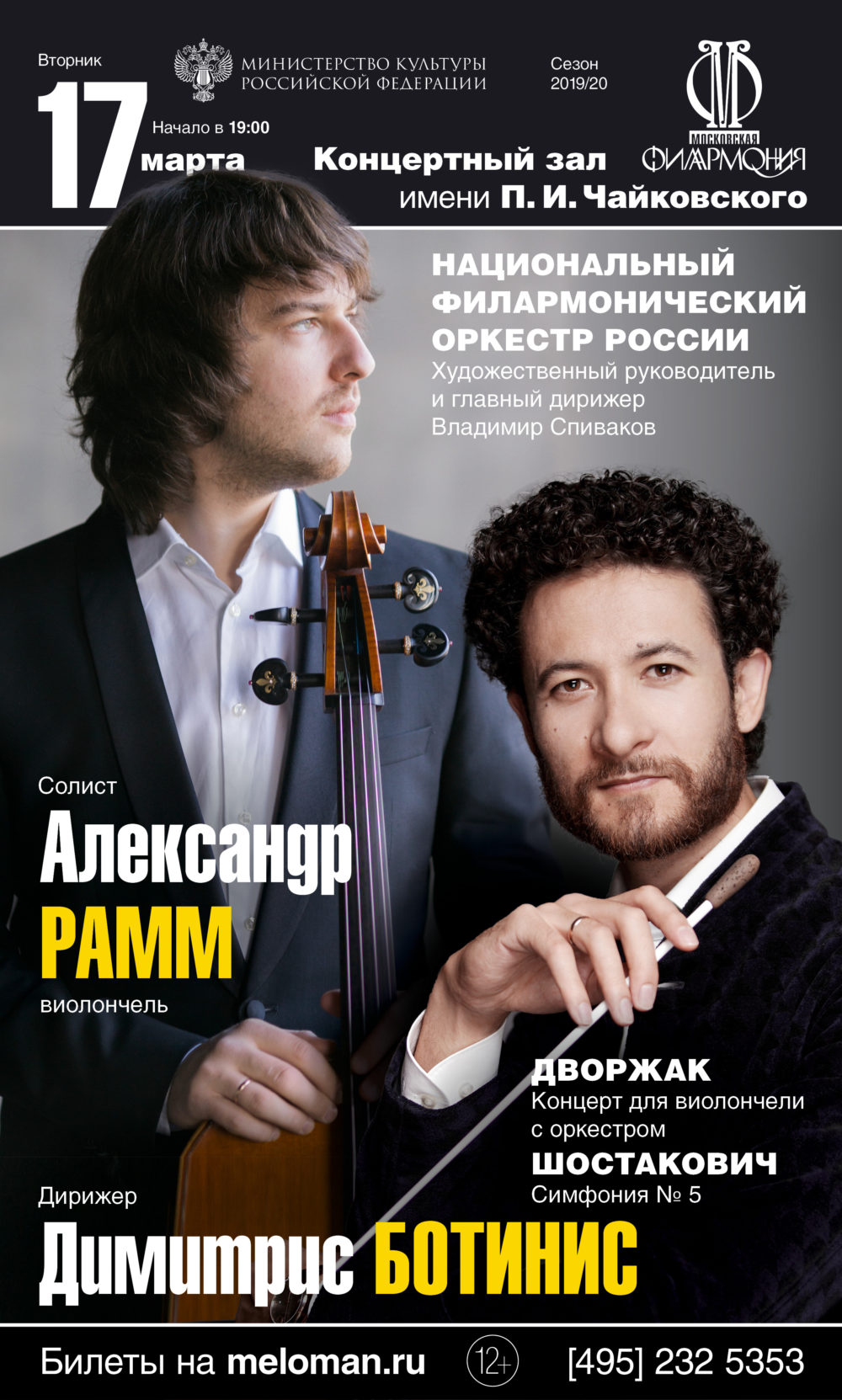 Continuing its own subscription series at the Tchaikovsky Concert Hall, the National Philharmonic Orchestra of Russia will present on March 17 a program featuring popular masterpieces of world classics. In the first part, Antonin Dvořák's Cello Concerto dedicated to Hanuš Wihan, professor of the Prague Conservatory, will be played. The Concerto, revered as a gem of the cello repertoire, is one of the most often performed for it is a piece which displays in full the maturity, proficiency and culture of a cellist. It embodies the composer's thoughts about his homeland and the fate of its people, as well as his personal emotions (while working on the Concerto, Dvořák got informed about the death of his former beloved one). Johannes Brahms  appreciated the orchestral and melodic opulence of Dvořák’s score and remarked that only then  did he understand what was desirable and  crucial to write for cello.

The solo part in the Concerto will be played by Alexander Ramm, winner of international contests in Boston, Pretoria, Beijing, Zagreb (Antonio Janigro Competition), the Paulo Cello Competition in Helsinki (the first prize winner from Russia ever). In 2010, Alexander won the First All-Russian Music Competition in Moscow, and in 2015 got the Second Prize at the International Tchaikovsky Competition. The Dvořák's Concerto, according to the artist, who knows his part by heart, “resonates with every fiber of a cellist, starting from a very young age,” but this music “is re-discovered anew again and again.”

Dimitris Botinis, the winner and awardee of all special prizes of the Antonio Pedrotti International Competition in Italy, the revelation of the First All-Russian Music Competition, the conductor of the Moscow Philharmonic Academic Symphony Orchestra and the head of the V.I.  Safonov North Caucasian Philharmonic Orchestra, will direct the NPR this night. “Botinis’s interpretations are characterized by theatrical vividness of images,  colorful tonal expressiveness, spectacular climax waves and deep lyricism,” - writes the Russian press about him.

Under Dimitris Botinis's baton, the “symphony-sphinx” by Dmitry Shostakovich will be performed, that is the Fifth Symphony in D Minor, written in 1937. It also treats the Homeland theme in its own way. The composer, who had endured the public persecution and  “formalism” accusations, betrayal of friends, and arrests of people close to him, conveyed in a symphonic form his fears, doubts, and a desperate hope of fortitude. Fusing in the Fifth Symphony his personal apprehension with the tragedy of the nation, Shostakovich created a rare artistic document of that era. The seemingly optimistic Finale called for a disparity of interpretations. Those who took the obsessive major tone at face value saw it as a “positive, life-affirming solution of the conflict.” Albeit, more perspicacious listeners, like the Polish composer and musicologist Krzysztof Meyer, appreciated how ably Shostakovich revealed “with all expressivity  the very essence of propagandistic optimism, which was imperative for the arts of the darkest years of the Great Terror.”