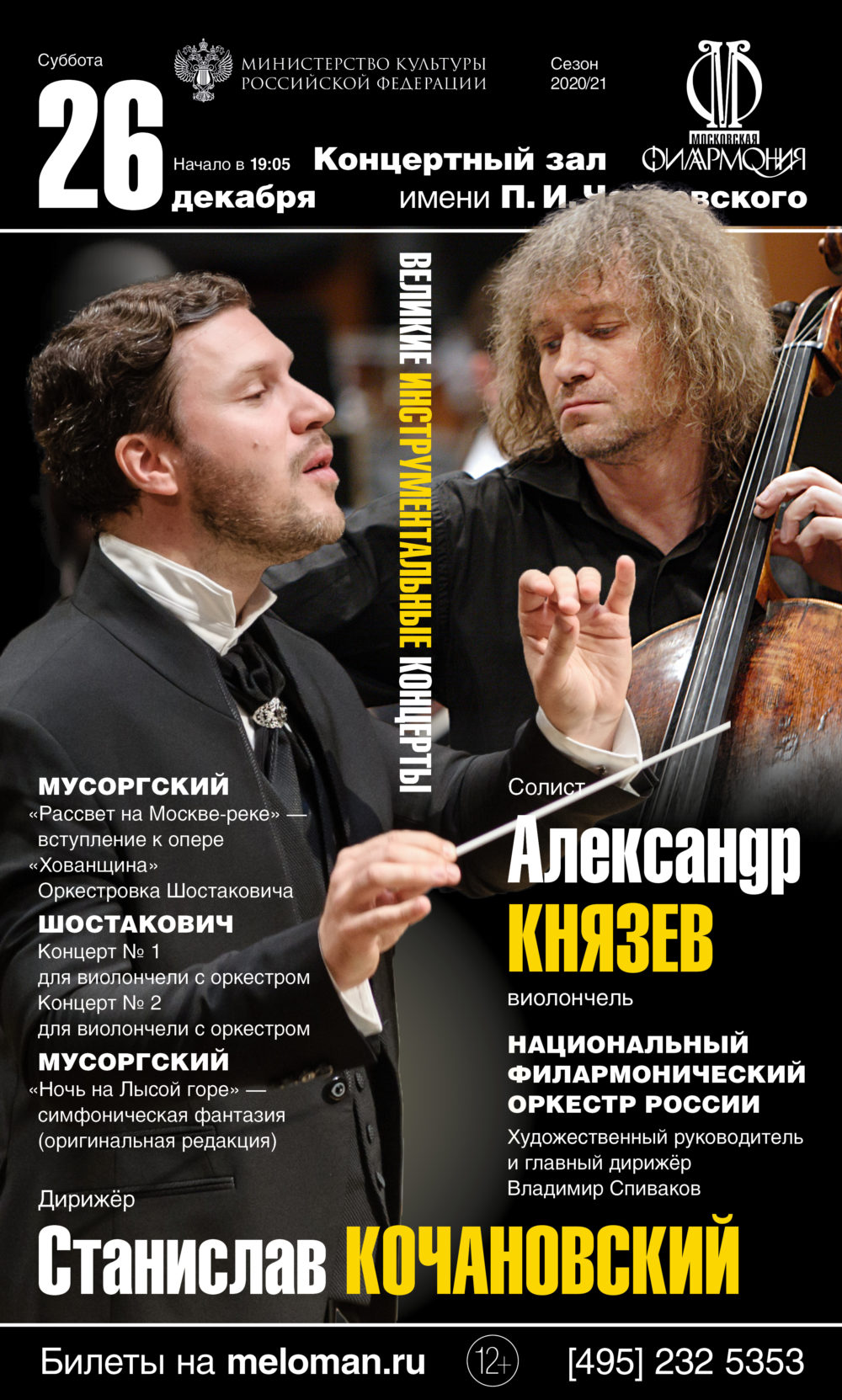 The National Philharmonic Orchestra of Russia will give its last concert in the waning year at the Tchaikovsky Hall with Alexander Knyazev, the renowned cellist and bright star of the Russian cello school, under the baton of maestro Stanislav Kochanovsky, the extraordinary conductor and regular collaborator of the NPR in recent years. Stanislav Kochanovsky's European career has been rapidly gaining momentum: he has appeared with the best orchestras and in top opera houses (also in Russia), has become a permanent member of prestigious festivals, in particular of those in Verbier and St. Petersburg (White Nights). When directing the NPR, the conductor always presents remarkable atypical programmes.

Critics and colleagues are full of praise for him: “The aristocratic gesture, the languid and poetic sensibility” (GB Opera Magazine); “He is a natural and an intelligent musician with a fluent technique and a strong sense of sound and style” (British conductor Colin Metters); “Kochanovsky has confirmed his place among the great conductors of our day” (Diapason Magazine).

The December programme at the Tchaikovsky Hall features the masterpieces by Russian classics - Musorgsky and Shostakovich, whose work is strongly related. For Shostakovich, the authentic representative of the “Mighty Five” (“monolithic, large, not-tainted and without varnish” - Musorgsky's words about the Russian people can be fittingly ascribed to himself) was an idol, “the greatest Russian composer”. “I am in awe of Mussorgsky,” he said.

Shostakovich made his own orchestral versions of Mussorgsky's operas Boris Godunov and Khovanshchina in order to remove all post-corrections and to return to the author's initial intentions, while his genuine attention to his predecessor was not limited to this. Stanislav Kochanovsky will open the concert with the musical landscape from the opera Khovanshchina, “Dawn on the Moskva River”, orchestrated by Shostakovich, and end it with the musical picture “Night on Bald Mountain” as scored by the author, which is played much less often than the well-known version by Rimsky-Korsakov.

The core of the programme will be Shostakovich's Concertos for cello and orchestra, written in the 1950-60s for Mstislav Rostropovich and dedicated to him. The French horn obbligato in the First Concerto will be performed by the NPR soloist Arseny Samsonov.

One thought on “Mussorgsky and Shostakovich in Stanislav Kochanovsky’s Programme”