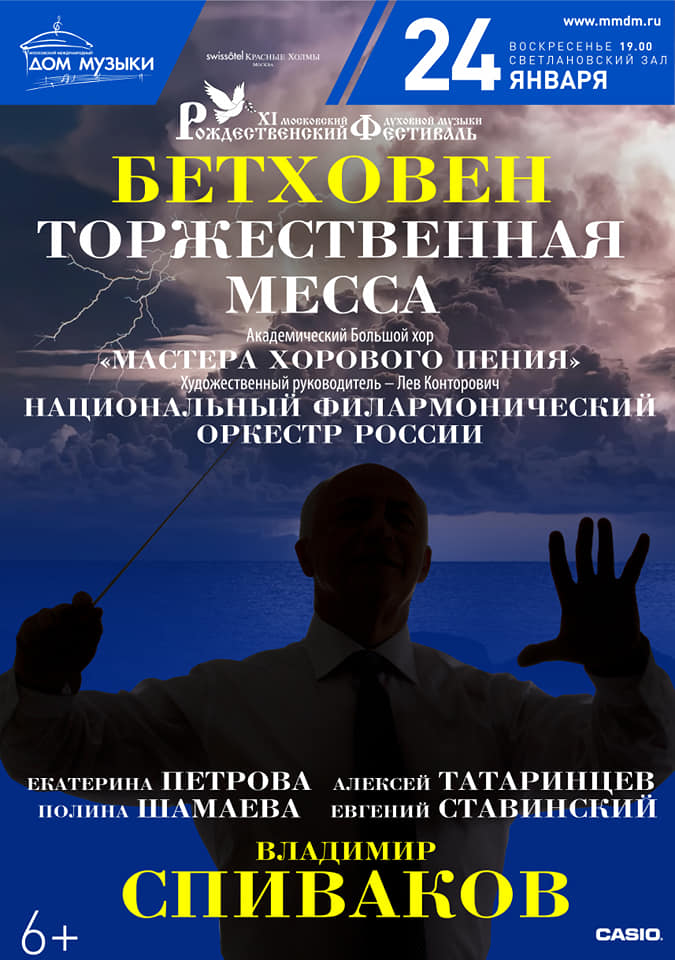 Each year Vladimir Spivakov, the National Philharmonic Orchestra of Russia and the Academic Grand Choir “Masters of Choral Singing” close the Christmas Festival of Sacred Music at the Moscow Performing Arts Center playing works from the golden heritage of world classics. This season, as the world celebrates the 250th birth anniversary of Ludwig van Beethoven, the final chord of the Christmas Festival will be one of the greatest creations by the Viennese classic - the grandiose Missa Solemnis. The performance will be joined by singers Ekaterina Petrova, Polina Shamaeva, Alexei Tatarintsev and Yevgeny Stavinsky, all stars of the E. Kolobov “Novaya Opera” Theater.

The Missa Solemnis, which took Beethoven five years to compose, was intended to be performed at the honorary celebrations of appointing Archduke Rudolph (the composer's pupil and patron) the Archbishop of Olomouc. Avoiding stylization, Beethoven relied in this magnificent work on the polyphonic experience of such old masters as Bach and Handel, the utmost representatives of the Franco-Flemish School. The author did not manage to complete the Mass on time, and its full setting was first performed in Russia on April 7, 1824, in St. Petersburg, and ever since has firmly established its place in Russian concert practice.

In connection with the performance on January 24, Vladimir Spivakov says: “Romain Rolland called this great score, born in the most difficult living conditions, a 'Song of Revival'. Beethoven considered the opus to be his favorite brainchild, while working on it he said: 'The holy spirit is dictating to me!' And wrote on the margins of the score: 'God is above everything - God has never left me'. Also with faith we continue our tireless service, asking, like Beethoven in his remark to Agnus Dei, with 'a prayer for peace, internal and external', so necessary for us all in this unstable time.”