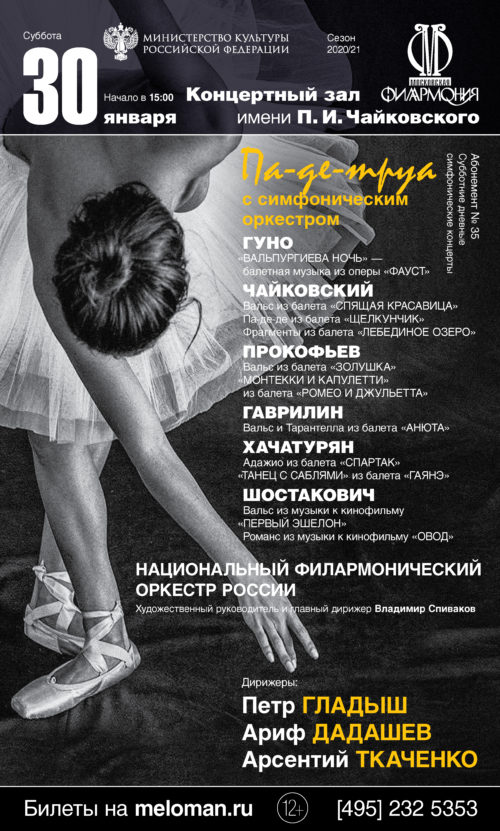 The “Here We Are!” subscription series of the National Philharmonic Orchestra of Russia will present a new program titled “Pas de Trois with a Symphony Orchestra” featuring choreographic divertissements from well-known operas, fragments from beloved Russian ballets and symphonic hits from film scores.

The main participants of the “Here We Are!” cycle are young members of the conductor-trainee group of the orchestra, first formed in the 2004/05 season at the initiative of Georgy Ageev, director of the NPR. The NPR conductor-trainee program has turned out to be successful and proved its viability as a major project supporting talented youth in their growth in one of the most challenging musical professions. The current edition of the group includes young, but already titled conductors, award-holders of international competitions, working with well-known orchestras and theaters.

The “Pas de Trois with a Symphony Orchestra” program contains works by Gounod, Tchaikovsky, Prokofiev, Khachaturian, Shostakovich and Gavrilin which will be directed by three young maestros: Arif Dadashev, conductor of the K.S. Stanislavsky and V.I. Nemirovich-Danchenko Musical Theater, Pyotr Gladysh, the NPR's principal cello, and Arsenty Tkachenko, a former trainee, and now a permanent conductor of the orchestra.