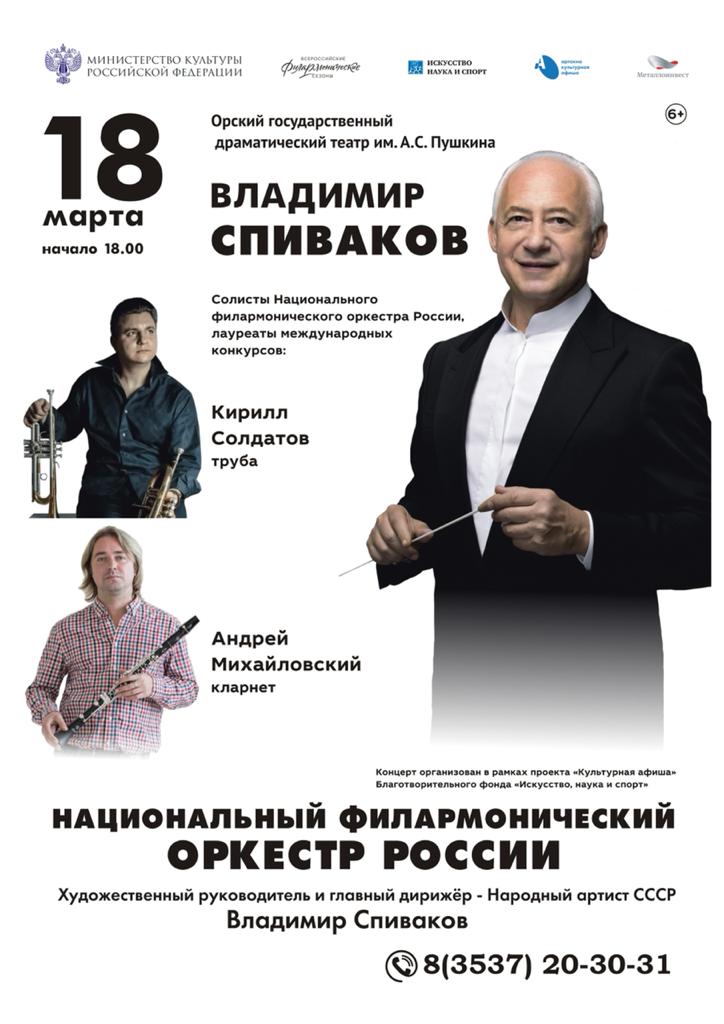 From 17 to 19 March, Vladimir Spivakov and the National Philharmonic Orchestra of Russia will give concerts in the Orenburg Oblast. In the city of Orenburg the collective will perform at the “Gazovik” Palace of Culture and Sports, then the musicians will be hosted by the A.S. Pushkin State Drama Theater in the town of Orsk and the Palace of Metallurgists in the town of Novotroitsk.

Concerts in Russian provincial regions make an important part of the NPR's cultural activities: every year the orchestra and the maestro offer outstanding artists of contemporary musical art, manifesting high professional skills and diversified programs, to audiences in large and small towns of our country.
The inventive program of the upcoming tour features musical masterpieces related to drama theater. There are famous orchestral fragments from Italian operas, the overture fantasy “Romeo and Juliet” by Tchaikovsky inspired by Shakespeare's tragedy, as well as virtuoso concert pieces on opera themes. The solo parts will be performed by award-winners of international competitions, principals of the NPR groups Andrei Mikhailovsky (clarinet) and Kirill Soldatov (trumpet).

The NPR's Russian tours are traditionally held within the framework of the All-Russian Philharmonic Seasons Project of the Moscow Philharmonic Society and the Ministry of Culture of the Russian Federation with the active support of Alisher Usmanov's “Art, Science and Sport” Charity Foundation. The main aim of the Foundation is to sponsor socially important actions in the field of culture, art and sports, scientific, educational and social projects on the territory of the Russian Federation, and its cooperation with the NPR is on an ongoing basis. In previous years, within the framework of cultural interaction with the Foundation, the collective gave concerts in towns of the Orenburg, Kursk and Belgorod Oblasts, as well as at the Palace of International Forums “Uzbekistan” in Tashkent.