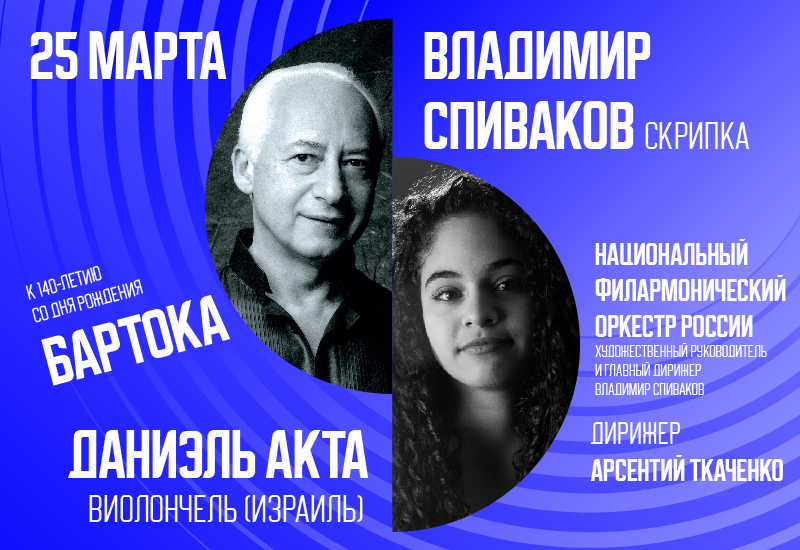 On March 25 the music world commemorates the 140th birth anniversary of Béla Bartȯk, the great Hungarian composer, pianist, teacher and ethnomusicologist. “Everyone, having reached maturity, must find an ideal to stand for, devote all his forces and activities to it. As for me, all my life, everywhere, always and by all means, I will serve one goal: the welfare of my homeland and the Hungarian people”- this was the composer's credo.

For the anniversary, Vladimir Spivakov has prepared a special program featuring works by Bartȯk and his contemporaries Kodály, Bloch and Dvořák. In Vladimir Spivakov's hands his famous Antonio Stradivari violin will sing again: the maestro will play the solo part in Bartȯk's virtuoso Rhapsody No. 1, inspired by Hungarian and Romanian folk music, as well as in Bloch's piece Nigun from the three-movement Suite evoking the Hebraic intonational melos and dedicated to Baal Shem Tov, the founder of the Hasidic movement.

In this concert, the NPR's artistic director will concede the podium to his young colleague Arsentiy Tkachenko, who joined the conductor-trainee group of the National Philharmonic Orchestra of Russia in the 2017/18 season, and since the 2019/20 season has been its permanent conductor.

The NPR will share the stage on this night with 19-year-old Israeli cellist Danielle Akta. She is a bright rising star, “whose talent and charm are just sensational, while the style is nothing but a reincarnation of Jacqueline du Pré.” The young artist has gathered wins at international competitions, including FLAME in Paris (2014) and MUSE in Athens (2013, 2015), performances with eminent musicians and ensembles, such as the renowned Israel Philharmonic Orchestra. At the Moscow International Performing Arts Center, Danielle will be the soloist in Bloch's most convoluted piece Schelomo, an envision of King Solomon. In full agreement with the composer's intention, the cello in this work outdoes the human voice in expressivity and is a powerful participant in the dialogue with the orchestra.