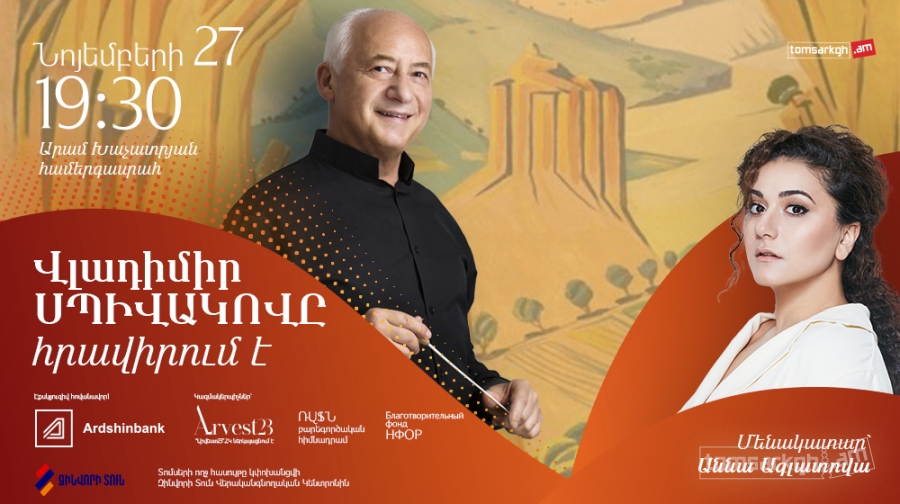 From 27 to 29 November Vladimir Spivakov and the National Philharmonic Orchestra of Russia will have a tour in Armenia. Two first performances will take place in the capital on the stage of the Aram Khachaturian Concert Hall. The final concert will be in the Vardan Adjemian State Drama Theater in Gyumri. See Events.

The 27 November concert in Yerevan will start a new project Armenia 301 aimed at uniting Armenians all over the world to help the “Soldier Home” Rehabilitation Center. The Center was founded in 2018 with the assistance of the “Help Wounded Soldiers and War Invalids” Fund, the Yerevan Medical University and the RA Defense Ministry. The Armenia 301 Program's goal is support and overall backing (medical, social, educational, material and so on) of impaired defenders of the homeland. The “Soldier Home” Center will get the box office revenue. The Project's symbol will be Martiros Sarian's “Armenia” painting (1923) which embodies hopes, faith and unity of Armenian people. The Project organizers propose to all around to take part in it, thus recreating a painting copy on a special digital platform.

The charity concert program features excerpts from operas by Tchaikovsky (Eugene Onegin), Rossini (Il Barbiere di Siviglia), Puccini (Gianni Schicchi and La Boheme) as well as Khachaturian's Masquerade Suite from the music to Lermontov's drama and Neapolitan Songs by Ernesto di Curtis. The Orchestra will be joined by the marvelous singer of Armenian origin, top star of the Bolshoi Anna Aglatova (soprano). The conductor will be the NPR's artistic director Vladimir Spivakov who has visited the “Soldier Home” and talked to the combatants under rehabilitation earlier this year.

The 28 November concert in the Armenia capital will be with the participation of pianist Alexander Kliuchko, winner of the first edition of the Rachmaninoff International Competition for Pianists and Conductors held this year. He will play the piano part in Rachmaninoff's Second Concerto. Then Vladimir Spivakov will present his seminal interpretation of Tchaikovsky's Fifth Symphony.

The tour will be ended by a matinee concert in Gyumri on November 29, where Vladimir Spivakov will conduct works by Khachaturian (the Masquerade Suite from the music to Lermontov's drama of the same name) and by Tchaikovsky (Polonaise from the opera Eugene Onegin and Suites from the ballets Swan Lake and The Nutcracker).

The tour is arranged by the “Arvest 23” non-governmental organization and the Armenian Society for Cultural Relations (Gyumri).