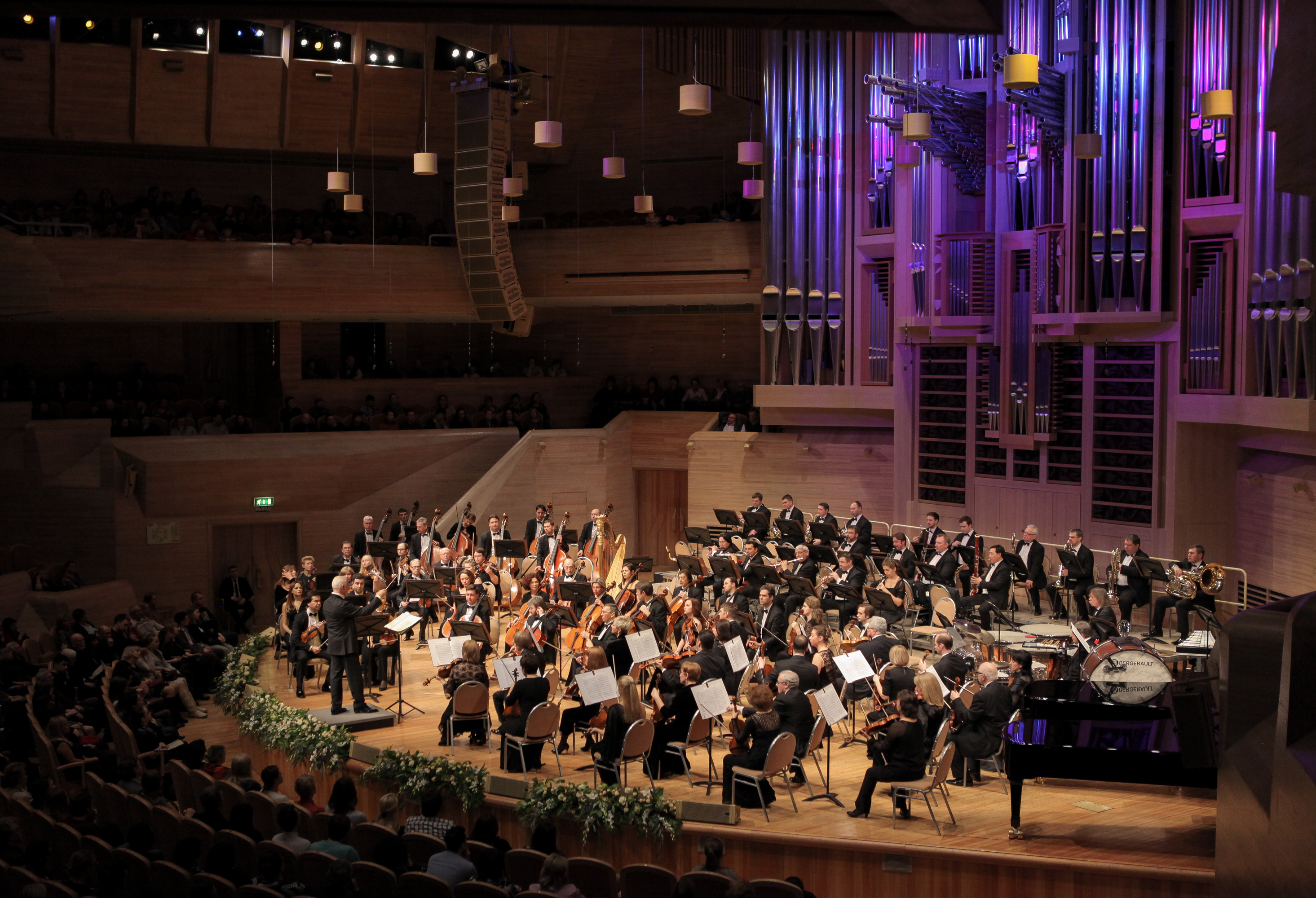 The 2021/2022 concert season promises to be very busy and diverse for the National Philharmonic Orchestra of Russia. Among the most important events of the coming season there are the following:
– the 11th edition of the Moscow Music Festival “Vladimir Spivakov Invites...” at the Moscow Performing Arts Center and the Zaryadye Hall featuring world opera stars Hibla Gerzmava (soprano), Lise Davidsen (soprano, Norway) and Stephanie d'Oustrac (mezzo-soprano, France), violinist María Dueñas (Spain), pianists Nikolai Lugansky and Lucas Debargue (France), members of the Jette Parker Young Artists Programme at the Royal Opera House Aygul Akhmetshina (mezzo-soprano) and Alan Pingarrón (tenor);
– tours in Russia, Italy, Austria and Uzbekistan (specifics below);
– Christmas Festival of sacred music in the Svetlanov Hall of the Moscow Performing Arts Center;
– the final round and gala concert of the winners of the Vladimir Spivakov Violin Competition in Ufa;
– Professor Lev Kontorovich's Jubilee concert at the Great Hall of the Moscow Conservatory.

In the 2021/2022 season the NPR will tour Italy twice with concerts in Rome (Academia Santa-Cecilia), Bologna and Firenze, and will perform in one of the world most renowned halls that is Musikverein in Vienna. Then on invitation of Alisher Usmanov's “Arts, Science and Sport” Foundation the NPR will give charity concerts in Tashkent, Samarkand and Bukhara.

In Moscow the NPR gives its concerts mainly in the Halls of the Moscow Philharmonic Society and at the Moscow Performing Arts Center. The Orchestra will display two cycles at the Tchaikovsky Concert Hall (Nos 24-25) and one in the Philharmonia-2's Rachmaninoff Hall (No. 100). The NPR will be joined by conductors Pierre Bleuse (France) and Stanislav Kochanovsky. Hungarian violinist Kristóf Baráti, pianists Alexander Volodin, Andrei Gugnin, Konstantin Emelyanov, George Li (USA) and others. The NPR's subscription series “Images. Dedication to E.F. Svetlanov” implies quite a special symbolic meaning in the year of the centenary of the Moscow Philharmonic Society as it will start with the “Birds” program fully repeating one of Svetlanov's concerts with the State Orchestra.

The NPR's two subscription series at the Moscow Performing Arts Center are rather contrasting, one being vocal (“World Opera Stars”) with Danielle de Niese (soprano, USA), Freddie De Tommaso (tenor, UK – Italy) and Lisette Oropesa (soprano, USA) and the other – instrumental (“Two Centuries of Russian Classic”) composed of works by Russian authors from Tchaikovsky to Artemyev.

The NPR was one of the first orchestras invited to perform at the newly built Zaryadye Great Hall in the historical center of the Russian capital near the Kremlin and Red Square. Since that time the NPR gives there about ten concerts a year. Within the 2021/2022 season the NPR will play at the Zaryadye Hall together with Alexander Ramm (cello), Matthias Höfs (trumpet, Germany), Sergei Nakariakov (trumpet), Nicolas Baldeiro (clarinet, France), Clara-Jumi Kang (violin, Germany), Xavier de Mestre (harp, France), conductors Mihhail Gerts (Estonia), Gabriel Bebeșelea (Romania), Andrey Boreyko.

The NPR's touring plans for the 2021-2022 season cover many Russian regions, European countries and Uzbekistan. Russian tours are of the first concern for the Orchestra as its name demands. The orchestra gives concerts and organizes editions of the “Vladimir Spivakov Invites...” Festival which include symphonic nights and chamber concerts of the NPR's members, master classes and charity events. The coming season envisages performances in the Volga Region (Samara, Ulyanovsk, Penza, Kuznetsk, Togliatti, Saratov), Murmansk and Severomorsk, Yaroslavl, Kaluga, Tula, Orel, the Kursk and Belgorod Regions, Omsk and Perm. A major part of these concerts are kept within the “All-Russia Philharmonic Seasons” Program by the RF Ministry of Culture and the Moscow Philharmonic Society.

The Orchestra will end the season traditionally in Colmar (Elsace) where for many years the NPR used to be an active participant of the International Music Festival whose Artistic Director Vladimir Spivakov has been for over thirty years. Each edition of the Festival is dedicated to a great musician of the 20th century, As in 2020 and 2021 the Festival was cancelled due to the Covid-19 pandemic, the 32th edition in 2022 will pay tribute to the eminent violinist Ivry Gitlis who passed away in 2020.